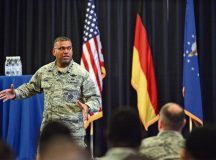 Lt. Gen. Richard M. Clark, 3rd Air Force and 17th Expeditionary Air Force commander, tours the 86th Airlift Wing Dec. 2 on Ramstein. During his visit, Clark was able to meet with Airmen throughout multiple organizations to learn about their duties and how they impact the 86 AW mission. 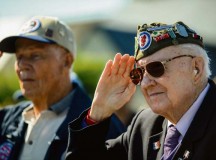 A World War II veteran salutes during “The Star-Spangled Banner” during a ceremony at the Picauville 9th Air Force monument June 4 in Normandy, France. More than 380 service members from Europe and affiliated D-Day historical units participated in the 71st Anniversary as part of Joint Task Force D-Day 71. 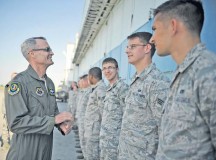