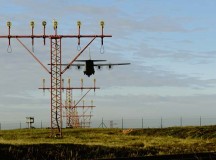 Watch me touch, watch me go

Airmen land a Ramstein C-130J Super Hercules on the runway as they conduct a touch-and-go landing Jan. 14 on Ramstein. Airmen from the 37th Airlift Squadron transport troops and supplies across a variety of airfields and must practice the touch-and-go to ready them for any situation that may arise during […] 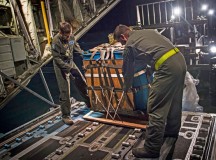 When you wish upon a cargo plane

Airmen hurriedly slipped on their gloves to shield any exposed skin from the white, chilled needles falling from the colorless, late-November sky. 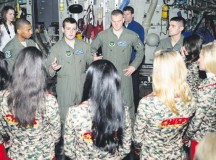 Airmen from the 37th Airlift Squadron explain their mission to the Kansas City Chiefs cheerleaders Nov. 2 on Ramstein. 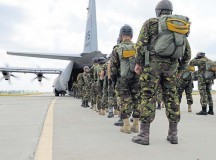 OTOPENI AIR BASE, Romania — Spirits were high among the participants of exercise Carpathian Summer as the first week came to a close Aug. 20 at Otopeni Air Base, Romania. 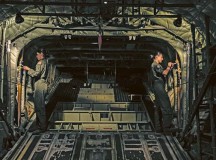 Hours before propellers turn and wheels leave the ground, one group of Airmen are the first pair of boots to step forward in the mission. 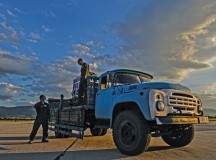 U.S. and Bulgarian paratroopers jump from an 86th Airlift Wing C-130J Super Hercules during a Halo jump over Plovdiv, Bulgaria, July 14. During this three-hourlong formation flight that consisted of two U.S. Air Force C-130Js and one Bulgarian air force C-27, more than 50 paratroopers exited the aircraft and landed near Plovdiv Airport. 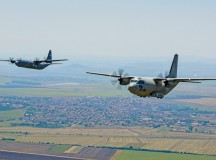 PLOVDIV, Bulgaria — Airmen from Ramstein went wheels-up for a bilateral training exercise with the Bulgarian air force July 14 through 24. 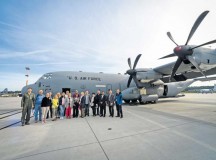 37th AS gives back with orientation flight

Airmen from the 37th Airlift Squadron gave a big “thank you” to German local national employees who work on Ramstein through an orientation flight June 29. 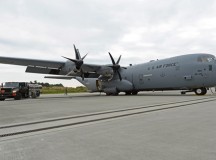 A C-130J Super Hercules is prepared for an airdrop training exercise over Kosovo May 27 on Ramstein. The airdrop was a joint exercise between the 37th Airlift Squadron and the 5th Quartermaster Company, Theatre Aerial Delivery Company, to en-hance interoperability. 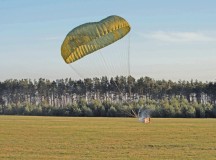 US drops first CDS at Polish Air Base

POWIDZ AIR BASE, Poland — For the first time, a container delivery system was airdropped by the 37th Airlift Squadron onto Powidz Air Base, Poland April 15 during an aviation detachment rotation.