Imagine all the hyper-competitive U.S. TV news networks, including those with vastly different political perspectives, agreeing to donate their shows free of charge and share airtime with rivals. 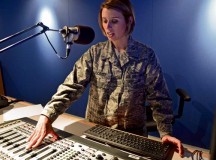