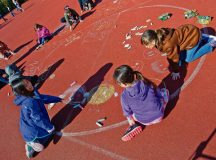 Chalking up our anxiety, separated from family

Azmeralda Poole pushes the chalk down on the ground and draws two dots inside a circle, cracking a grin as she sketches a smiling face. She points to her creation as she looks up at Nicole Flores, her Vogelweh Elementary School counselor.

ROBINS AIR FORCE BASE, Ga. — The Department of Defense has given sexual assault victims a resource that helps them take control of their recovery process. 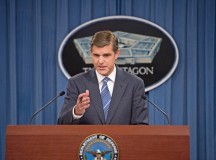 WASHINGTON — The Department of Defense will continue to support moderate Syrian forces in the fight against the Islamic State of Iraq and the Levant, Pentagon Press Secretary Peter Cook said today.

The Department of Defense implemented a change to the military equal opportunity directive in June to resolve unlawful discrimination complaints based on sexual orientation.

by Secretary of the Air Force Public Affairs Command Information

WASHINGTON — The Air Force maintains its commitment to protect personal information from cyber threats by continuing efforts with the Department of Defense and the Office of Personnel Management to assist those impacted by the recent cyber incident involving federal background investigation data.

Airmen signing a lease to live in privatized homes on base may no longer be covered by a renters insurance provision, due to a recent Department of Defense change in basic allowance for housing.

If you’ve read or listened to the news any time in the past year, you’ve probably heard stories about the dire situation surrounding the Department of Defense budget. The Air Force is and will continue to be affected by the changes in funding levels that are being discussed. Many of the most visible and personal effects of these changes are likely to occur in the realm of personnel pay, retention and benefits.