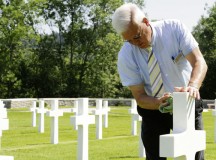 Recently, Brig. Gen. Paul M. Benenati, the 21st Theater Sustainment Command deputy commanding general, visited a small cemetery at the foothills of the Vosges Mountains. The Epinal American Cemetery and Memorial houses the remains of 5,255 fallen U.S. Soldiers and is considered a beautiful tribute to the warriors laid to rest there. After his visit, Benenati remarked that this unique landmark overlooking the Moselle River was an under-noticed burial site for Soldiers killed during World War II.