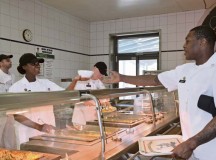 The Hard Rock Diner dining facility on Baumholder’s Smith Barracks was named the best in Europe for the second year in a row, as well as runner-up at the Department of the Army level for fiscal year 2014.