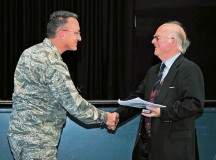 Friedrich Wilhelm von Hase, son of German army Lt. Gen. Paul von Hase, spoke to the KMC April 15 at the Hercules Theater about his father’s life, death and the effect that Operation Valkyrie had on him and his family.