According to the official website of the Nobel Prize, Severo Ochoa was born in Spain in 1905. He went to medical school at the University of Madrid and graduated in 1929. In 1941, Ochoa moved to the United States. Ochoa became the first Hispanic American to win the Nobel Prize […]

According to Vintage 2015 Population Estimates, the Hispanic population of the United States was 56.6 million as of July 1, 2015, accounting for 17.6 percent of the U.S. Population. For more information, visit www.census.gov. 86th Airlift Wing’s Hispanic Heritage Month events • Through Oct. 10: Coloring contest for children 10 and […] 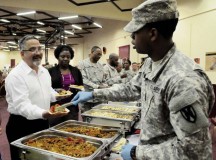 The 21st Theater Sustainment Command hosted a Hispanic Heritage celebration commemorating the history and culture of Hispanic-Americans with a guest speaker, a food tasting, and music and dance demonstrations at the Kaiserslautern Community Activity Center Oct. 7 on Daenner Kaserne.

I often reflect on what a great privilege it is to serve for a military service composed of people from all the corners of the Earth fighting together for a common purpose: world peace.

A tale of heroism: ‘I was just doing my job’

My father, Fernando C. Lugo, was drafted into the Army in November 1966. After completing high school, he received a letter that said, “Greetings, you been drafted into the Army,” which included a 12 cent New York City subway token to help him report to basic training.