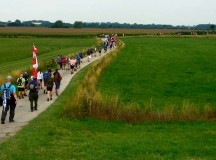 The annual Nijmegen “Vierdaagse,” the Four Days Marches, in the Netherlands is an event regional marching enthusiasts and service members, among others, look forward to all year. For some, it is a chance to prove their strength and resiliency. For others, it is a chance to join thousands of other marchers in the world’s largest walking event and earn a coveted ribbon. Regardless of the reason, everyone must complete his or her individual distance — and 30 to 50 km a day is no small feat. 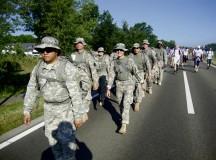 Since November 2012, a small team of dedicated Soldiers have been crawling out of bed in the early hours two to three times a week to march with each other at times over 25 miles. This sacrifice was in preparation for one of the most arduous and intensely celebrated annual events of modern times — the International Four Days Marches Nijmegen.