Most people have probably heard the old adage, “sticks and stones may break my bones, but words will never hurt me.” Maybe they have spoken these words themselves in an effort to dissuade a bully’s attack, but in reality, we know that words can hurt and can cause damage. 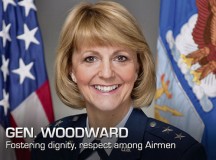 It’s not an overstatement to say the past many years have been challenging for those in the military working to prevent sexual assault and sexual trauma. However, for those who’ve been victimized it has been much worse, and we should never forget that.