WASHINGTON — Air Force reports of sexual assault decreased slightly in fiscal year 2015, while reporting by male victims increased according to the service’s annual report on sexual assault released May 5. 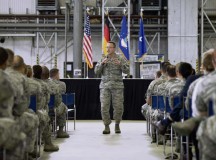 Airmen from the 86th Airlift Wing on Ramstein took an entire work day to focus on the importance of sexual assault prevention and response May 28.

What SAPR stand-down day is all about

Ever since I can remember, I enjoyed helping people. It was something that brought me great happiness. Helping support my friends, family and co-workers was always something that I felt was my mission to do. I felt a personal responsibility to serve others and to relieve the pain of those […]

SAPR: Stepping in to protect lives