April is Sexual Assault Awareness and Prevention Month and the 86 Airlift Wing SAPR office said sexual assault has a significant impact on the military community at large. One Ramstein Airman stepped forward to tell her story. To maintain her privacy, we have agreed to refer to her as Airman “Z.” 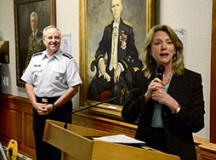 Airmen gathered in the Pentagon with the Air Force’s top leaders for a ‘chalk walk’ to raise awareness about sexual assault, April 20.

WASHINGTON — Since 2001, April has been the month that the nation has focused its attention on sexual assault awareness and the impact this crime has had on its victims.