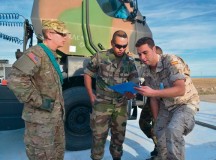 As the largest NATO training exercise in more than a decade culminated in an international combined arms offensive punctuated by an air assault by 82nd Airborne Division paratroopers, the logisticians, planners, movement controllers, fuel handlers, mechanics and medics of the 21st Theater Sustainment Command worked as feverishly on redeployment as they had on the original deployment of allied forces, weapons systems and gear over the weeks and months preceding the massive mission.