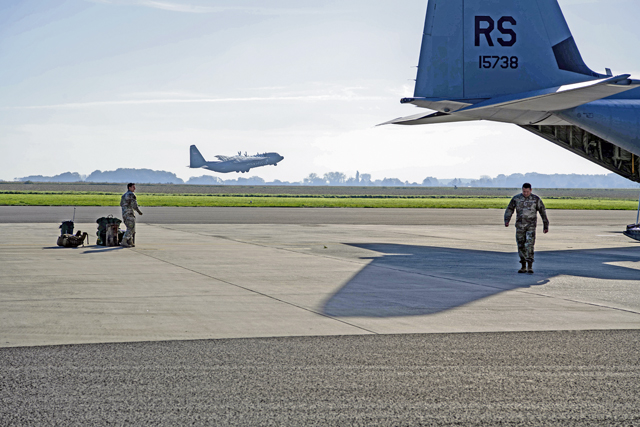 CHIEVRES AIR BASE, Belgium — “Ten years is a short existence as a squadron, but we are in a unique position to build a legacy,” explained U.S. Air Force Lt. Col. Kevin D. Coughlin, 424th Air Base Squadron commander. “Our attitude, our culture and our drive will influence our squadron’s culture for years to come.”

Airmen from the 424th ABS, also known as the ‘Red Devils,’ hosted a three-day event to celebrate the 10-year anniversary of the squadron, Oct. 11-13.

“We are a small and diverse squadron with a unique opportunity to work and learn from our joint and NATO partners,” said Coughlin. “Every ABS has their own unique construct, but what makes us different is having 17 Air Force Specialty Careers that make up our squadron that would traditionally fall into various groups throughout a wing.”

The 424th ABS is a geographically separated unit of the 86th Airlift Wing at Ramstein Air Base, and it is located at U.S. Army Garrison-Benelux, Belgium. Their primary mission is to operate a NATO airfield in support of Supreme Headquarters Allied Powers Europe and other distinguished visitors from any of the 30 NATO nations.

“While they deal with a steep learning curve, the Airmen of the 424th ABS truly embody the Air Force Core Values of ‘service before self’ and ‘excellence in all we do,’ taking ownership and responsibility of the different programs and proving the best service and products as possible,” expressed Master Sgt. Stephen Spader, 424th ABS senior enlisted leader and Security Forces section chief.

In celebration of 10 years of hard work and partnership with the local community, the 424th ABS hosted a farmer’s breakfast with a static display of a C-130J Super Hercules aircraft and squadron overview, which included an in-person survival evasion resistance and escape training with Airmen from the 86th Operations Support Squadron from Ramstein Air Base. The events also included a spouse’s day and an anniversary barbecue with closing remarks from Coughlin.

“The Red Devils are a team of humble professionals that are experts at their job,” Coughlin said. “As their commander, I never worry about their ability to safely and effectively accomplish the mission.”

As well as supporting DV airlift, Airmen from the 424th ABS operate a tactical landing zone and three drop zones in support of tactical flying training for both USAFE-AFAFRICA and NATO.