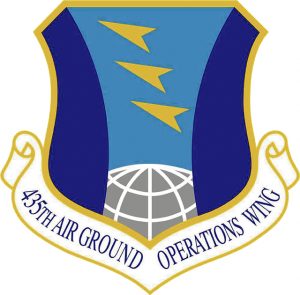 The 435th Air Ground Operations Wing has been at Ramstein for nearly two decades, both as a host wing and as a tenant. The 435th’s history, however, is much longer and more illustrious than just its last twenty years. In the nearly 80 years since its inception, the 435th has helped drive the Nazis from France, saved lives during countless humanitarian airlifts and medical evacuations, served as host wing on two different bases in Germany, and stood up the Air Force’s only wing in Africa.

In 1943, the 435th Troop Carrier Group was created as part of the Army Air Forces, with the mission to transport airborne infantry, parachute troops, glider units, and materiel. After a few months of training, the group moved to England to prepare for operations in the European Theater. On D-Day, the 435th dropped troops from the 101st Airborne onto Normandy during Operation NEPTUNE and later that day delivered much-needed supplies using Waco gliders. For their participation in the Normandy Invasion, the 435th earned the Distinguished Unit Citation. The airmen of the 435th also flew in support of Operation MARKET-GARDEN in the Netherlands, Operation DRAGOON in Southern France, and Operation VARSITY crossing the Rhine into Germany. Although dropping paratroopers and towing gliders into combat was an important aspect of the 435th’s mission, most of its time during the war was spent delivering cargo, such as fuel and rations, to ensure the Army could continue its drive across Europe. The 435th delivered supplies to Patton’s army driving across France and even dropped vital cargo to the beleaguered Easy Company stuck in Bastogne.

After the war, the 435th entered Reserve status as the 435th Troop Carrier Wing. It found itself mobilized in 1951 for nearly two years to support the Korean War and was occasionally called to active duty during times of national crises. Initially operating out of Miami International Airport, the wing later moved to Homestead AFB in South Florida. During these years in Florida, the 435th flew primarily C-119 Flying Boxcars and C-124 Globemasters in transport and airborne missions, particularly to the Caribbean and Central America. When hurricane Donna ravaged South Florida in 1960, the 435th TCW spent three days delivering food, water, supplies, and even bridge panels to stranded residents in the area. By 1965, the wing was once again inactivated.

The 435th returned to Europe in 1968, when it was activated as the 435 Military Airlift Support Wing. In 1969, the wing arrived at Rhein-Main AB in Germany where it would remain for more than two decades. Initially operating as a Military Airlift Command  support wing, the 435th provided deployed airlift control elements and maintenance at aerial ports in Europe, Africa, Southwest Asia, and the Middle East. In 1975, it became the 435 Tactical Airlift Wing and took over hosting duties at Rhein-Main — then the busiest U.S. air terminal in Europe. With its airlift and medical evacuation mission, the 435 TAW was extremely busy over the next two decades. The many squadrons of the 435th helped evacuate the injured Marines after the 1983 Beirut barracks bombing, returned the Iranian hostages in 1981, and evacuated the victims of a brutal mortar attack at a Sarajevo market in 1994. The 435th itself fell victim to terrorists when a bomb exploded outside of wing headquarters in 1985, killing two and injuring many more.

In the 1990s, the wing was also busy with several humanitarian airlifts: Operations PROVIDE PROMISE, PROVIDE HOPE, and PROVIDE COMFORT. The 435th performed the first American aid delivery into Sarajevo during Operation PROVIDE PROMISE, a two-year mission to airlift supplies to the surrounded city during the Yugoslavian Civil War. The 435th efforts during this operation earned it a Joint Meritorious Unit Award. Early in 1994, the 435th Airlift Wing began turning over portions of Rhein-Main back to German control, drawing down until the wing inactivated in 1995.

It was not until nearly ten years later that the 435th returned, this time activated as the 435th Air Base Wing at Ramstein AB in 2004. The 435th took over host wing responsibilities from the 86th Airlift Wing and was responsible for the entire Kaiserslautern Military Community. All of the major support units on base, such as the Logistics Readiness Group, the Medical Group, and the Mission Support Group, all fell under the 435th. Because the 86th’s commander remained as commander of the KMC with the 435th commander as deputy, the next several years were rife with confusion and annoyances regarding powers and responsibilities. In 2008, it was decided that the current organization of the 86th and 435th was too cumbersome and a change was needed.

On July 16, 2009, the 435th changed designations for the last time, becoming the 435th Air Ground Operations Wing. The 86th AW now took over host duties at Ramstein, as well as responsibility for the KMC, streamlining the organization of both wings and removing the complications. The 435th went from an air base support mission to a primarily expeditionary operations and support mission with emphasis on contingency response operations and air-ground operations. All of its previous support units were inactivated and activated as new units under the 86th. The wing received the 435th Contingency Response Group with its base opening mission, the 435th Air and Space Communications Group with expeditionary and base support communications mission, and the 4th Air Support Operations Group with a TACP and weather support mission. Today, the 435th is working to more closely integrate its three groups to support USAFE’s mission on the continent.

One of the most unique aspects of the 435th is its dual wing, the 435th Air Expeditionary Wing. Activated in 2013, the AEW is the Air Force’s only wing in Africa, created to improve command relationships and support to units on the African continent. The entire 435th AGOW’s command team, including the commander, is dual-hatted, splitting their time between the two active wings. Since its inception, the 435th AEW has more than doubled in size and provides tactical airlift, personnel recovery/casualty evacuation, and base operations support for two groups, ten squadrons, and four airfields.