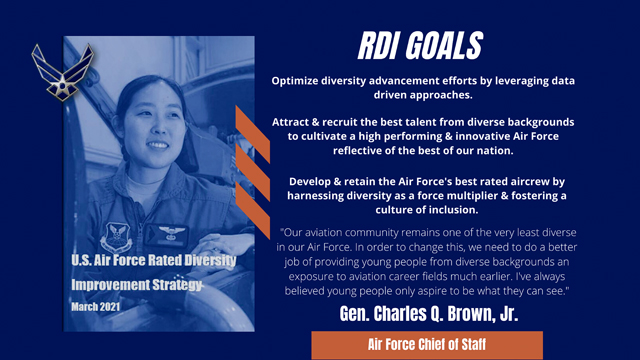 The RDI Strategy is the Air Force’s flight plan to strengthen diversity within rated career fields through three overarching goals:

Attract and recruit the best talent from diverse backgrounds to cultivate a high performing and innovative Air Force reflective of the best of our nation.

Develop and retain the Air Force’s best-rated aircrew by harnessing diversity as a force-multiplier and fostering a culture of inclusion.

“Our aviation community remains one of the very least diverse in our Air Force,” Brown said. “In order to change this, we need to do a better job of providing young people from diverse backgrounds an exposure to aviation career fields much earlier. I’ve always believed young people only aspire to be what they can see.”

The RDI Strategy is a collaborative effort with the Total Force recruiting enterprise, aerial demonstration teams, affinity groups and other community organizations to increase awareness and cultivate engagement among qualified Airmen and youth, with a focus on those of underrepresented groups — the outcome being an agile and diverse workforce that approaches challenges from varying perspectives.

“The RDI Strategy is part of the Air Force’s broader initiative to improve diversity and inclusion across the entirety of the force,” Bass said. “We will continue to take action in ensuring diversity, inclusion and equal opportunity for all service members, generations to come.”

While RDI is part of an Air Force-wide initiative, AETC plays a key role in its success, as AETC leadership is responsible for integrating, synchronizing and ensuring implementation of the RDI Strategy across the force.

“AETC is focused on accelerating the Department of the Air Force efforts to improve the diversity of our rated career fields,” said Lt. Gen. Brad Webb, AETC commander. “We will consider success when diversity and inclusion are fully ingrained throughout the force, and every Airman and family is supported and empowered to reach their full potential.”