U.S. Army installations across Europe will migrate to a new emergency messaging system this summer. 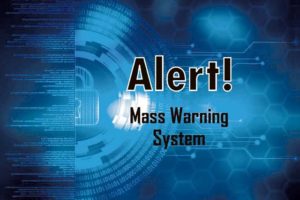 Alert! Mass Warning Notification System, or MWNS, will replace the current AtHoc system.
The Army’s MWNS notifies service members, Army civilians and their families during a crisis. MWNS operators, for example, can issue alerts in the event of an active shooter, inclement weather or any other event requiring immediate notification.
“In the event of an area-wide incident, we will use Alert! to inform the community about safe havens, family assistance centers, shelter locations and numerous other things,” said U.S. Army Garrison Rheinland-Pfalz Emergency Management Specialist Jeremy Watson. “Alert! allows us to get information out to the community in a timely manner – information you may need to help you survive.”

The migration will affect all U.S. Army personnel stationed at or on assignment in Europe.
Installation Management Command-Europe — the agency overseeing Army garrisons in Europe — joins the Army-wide effort to migrate to the new mass warning system. The Army published an order Dec. 13, 2018, directing the migration.
The Army currently has two systems deployed across 100 installations. The migration to a single MWNS reduces costs and redundant investments. Migration across the Army will be complete no later than Feb. 29, 2020, according to EXORD 033-19.
Army garrisons in Europe will migrate July 22 to August 2, according to the following timeline:

The Alert! MWNS provides similar service to the AtHoc system, capable of sending emergency notifications to worldwide users via desktop pop-up, mobile phone, SMS text, email and public distribution. There will be no difference between AtHoc and Alert! with the exception of the way messages look and sound, Watson said.
Alert!, however, is a government off-the-shelf system, meaning it was created and owned by the U.S. federal government. So unlike AtHoc, Alert! doesn’t have license fees and is cheaper to operate. It also means that your Alert! account will follow your Army career — both as a civilian and service member overseas and in the U.S.
Additionally, Alert! allows registered users to add up to 10 different phone numbers to include more family members and dependents.
Current AtHoc user accounts will automatically be migrated to the Alert! system, so there’s no need to register. However, once the migration is complete at the end of July, users should update their profiles by clicking on the blue globe from their workstations, Watson said.
Personnel not covered by the AtHoc system will be afforded the opportunity to register for the Alert! after the migration is complete.

For information about how to register for Alert!, visit the garrison website at https://home.army.mil/rheinland-pfalz