The current iteration of Atlantic Resolve has demonstrated the Army’s ability to successfully move armored combat power from strategically located seaports to training and forward operating locations all across Europe.

To execute equipment staging and onward movement on this scale and across these distances, transporters and logisticians from commands like the 598th Transportation Brigade, Surface Deployment and Distribution Command, the 21st Theater Sustainment Command, the U.S. Navy’s Military Sealift Command, along with the supported brigades, engaged in months of detailed planning before the first piece of gear moved anywhere. 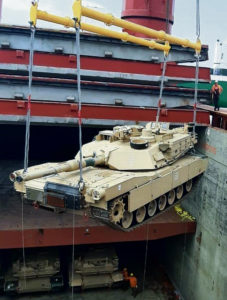 “That means we were moving two ABCTs worth of equipment into and out of ports that were more than 2,200 kilometers apart. Despite the complexity of movements like these, our teams accomplished the transportation mission safely and on time. We also demonstrated the Army’s ability to deploy tanks and armored vehicles virtually anywhere in Europe at a time and place of our choosing. That’s how we provide maneuver options for large-scale combat operations and for land-force commanders in this theater.”

“Importing and exporting equipment from two different units at the same port is challenging,” said Chief Warrant Officer 2 Ron A. Barker, Mobility Officer, 838th Transportation Battalion, 598th TBDE, and the lead for conducting port operations in Klaipeda. “However it’s also a great opportunity for the Army and our Lithuanian partners to increase our interoperability and enhance what is already an excellent partnership.”

In Alexandroupoli, this Atlantic Resolve rotation represented the first opportunity to use the port facility to move tracked vehicles like M1 tanks and Bradley Fighting Vehicles. Previously, the port had supported the discharge and staging of combat aviation brigades and wheeled vehicles only.

“Alexandroupoli has developed into one of the most vital ports in Europe for the movement of Army equipment,” said Andre J. Cameron, director of the Transportation Corps, Eastern Mediterranean (Greece) Detachment. “We’ve now proven we can move both aviation and armored units at Alexandroupoli, using both commercial line-haul and rail. Basically, we can do it all here.”

Division arrived at the port facility in Alexandroupoli, Greece, July 20. This the first time the U.S. Army has deployed tanks, Bradley Fighting Vehicles and other tracked equipment through the port. The 1st ABCT is arriving for its nine-month deployment to the European theater in support of Atlantic Resolve.

The soldiers and Army leaders supporting this Atlantic Resolve rotation emphasized that it took a “Team of Teams” approach to achieve success both at the ports and in the onward movement phase of the operation.

“When you step back and look at the scale of this rotation, we really did have ‘tanks everywhere’ in our theater,” added Hirsch. “It’s the synchronization with our teammates at the 21st TSC, MSC, the rotational brigades and with our allies and commercial partners that makes the movement of this kind of armored power possible. We really strengthened many of our key relationships during this Atlantic Resolve iteration and this will pay great dividends, not just for Atlantic Resolve, but for every type of operation and exercise we support here in Europe.”

The deployment of ready, combat-credible, rotational Army forces for Atlantic Resolve is evidence of the strong U.S. commitment to NATO and Europe. Through bilateral, joint, and multinational training, Atlantic Resolve builds readiness, increases interoperability, and enhances the bond between ally and partner militaries.

All movements of personnel and equipment are conducted while adhering to the prevention and protection guidance directed by the Department of Defense, Department of the Army, Centers for Disease Control, host nation governments, and local authorities to proactively mitigate the spread of COVID-19. The health, safety, and security of U.S. personnel and U.S. allies, partners, and local populations is a DOD priority.

For more information on the U.S. Army’s contribution to Atlantic Resolve, visit https://www.EuropeAfrica.army.mil/AtlanticResolve.