Asian Hornets: A new pest of concern for Europe and the US 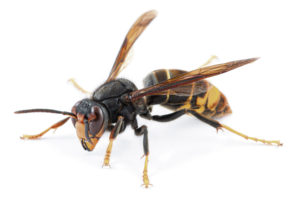 The Asian hornet, also known as the yellow-legged hornet (Vespa velutina), is a species of hornet indigenous to Southeast Asia. They are slightly smaller than the European hornets and are generally much darker brown or black with distinctive yellow legs. (Note: This insect is not to be confused with the Asian Giant Hornet or so called “Killer Hornet”. This larger species has not been found in Europe.)

Like other hornets, Asian Hornets builds nests that may house colonies of several thousand individuals. All females in the colony are armed with formidable stingers with which they defend their nests and kill their prey. The nest is of paper, roughly in the shape of a huge egg, and can be as large as 20 inches in length. It is of concern as an invasive species in several other countries. Asian hornets opportunistically hunt a very wide range of insects, including flies, and dragonflies. The major concern about their invasiveness however, is that when they find a bee colony or an apiary, they tend to settle down and specialize in honeybees as their prey.

Asian hornets were brought across to Europe by mistake when a container of Chinese pottery holding the insects entered France in 2004. Since that time the species has quickly spread throughout much of France, but also parts of Spain, Portugal, Belgium, Italy the Netherlands and most recently Germany. They were first reported on the Channel Islands and the UK mainland in 2016. 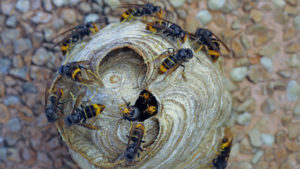 Why are Asian Hornets a problem?

This hornet is a serious pest of honeybees and single hornets have been known to decapitate up to 50 bees a day, dragging the bodies of their prey back to their nests. As a single hornet colony can contain thousands of individuals, they can quickly wipe out all beehives within flight distance of their nest. Because of hornets’ larger size, their sting is more serious than that of a bee. People have been hospitalized in France after suffering anaphylactic shock as a result of multiple stings. If introduced into the United States this invader could be a serious threat to U.S. honey production and native pollinators.

How can preclearance programs help keep Asian Hornets from getting into the US?

Primary nests are often found in or on man-made structures. It may be introduced and transported accidentally with soil associated with plants, vehicles, garden furniture and pots, outdoor articles, camping equipment, etc. Dormant hornet queens can overwinter in nests and can be transported to new areas.

All articles stored outdoors for any length of time including all vehicles and military rolling stock should be carefully inspected for active or dormant hornet nests. Nests of any bees, wasps, or hornets should be removed before transport to CONUS.