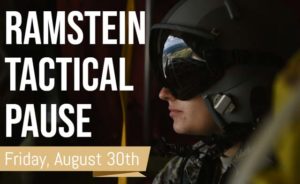 The 86th Airlift Wing and mission partners participated in an Air Force-directed resiliency tactical pause on Ramstein Air Base, Aug. 30.
Approximately 5,800 Airmen, U.S., and local national civilians assigned to the 86th Airlift Wing began the day by attending an all call with Brig. Gen. Mark August, 86th AW commander. Personnel then broke off to attend their own squadron-directed itineraries for the day, including discussion groups and outdoor activities.
At the all call, August explained that the pause comes as a proactive measure against suicide, and he imparted a story of a difficult time in his life.
“I don’t often share this story, but my brother was my best friend,” August said. “He was the best man at my wedding and the godfather to my sons. I’ll never forget the day I got the phone call that he was killed in Iraq by an IED.”
August talked about coping with loss and preparing for those times before they come. Resiliency, he said, is about finding ways to connect to each other so that Airmen have a support system when hard times come.
“This day is designed for all organizations across the Air Force to pause just for a few moments and understand some of the stressors in each one of our lives,” August said earlier in the week.
He explained his perspective on the source of those stressors by summing up three generations in today’s Air Force. The first, he said, is the generation he joined: the post-Desert Storm and pre-9/11 world. Their focus was deterrence and their thoughts were on the high-end fight, and they were thrust into leadership roles once 9/11 happened. The second generation, August said, are the Airmen who joined after 9/11. Those Airmen were motivated by a surge of patriotism and the chance to serve their nation. That generation is serving in leadership today. The last generation August described are those who joined after 2012, when Iraq and Afghanistan were winding down.

“We’re realizing that the discussions we now need to have on resiliency are a little bit different than, say, the ones that we started with when we joined the Air Force a while ago,” August said.
Chief Master Sgt. Ernesto Rendon, 86th AW command chief, addressed the generations separately on Aug. 19, speaking to the post-9/11 Airmen first.
“Recognize that you’ve got about 18 years of service, roughly,” Rendon said. “The experiences that you had as a young Airman, senior Airman, staff sergeant, or technical sergeant, they’re unlike what our Airmen are dealing with today.”
Rendon reminded members of the post-9/11 generation that the challenges of deployment during their time were not the same as now. Today’s Airmen have different experiences, are under different expectations and face a different deterrence posture than more experienced leaders in their developmental years.
“And if you’re in that younger category with about seven years of experience or less, recognize that it’s difficult to near-impossible for us to relate with your experiences today,” Rendon said. “I ask you to help us. Teach us.”
Rendon explained that the tactical pause is all about giving Airmen and leadership a chance to begin that discussion.
August said that this is not a “one-and-done” moment. He encouraged personnel to provide continuous feedback or ideas through their chain of command or first sergeants.
“We’re looking forward to getting feedback from the field as to what’s working for our Airmen as we tackle this resiliency challenge,” August said.