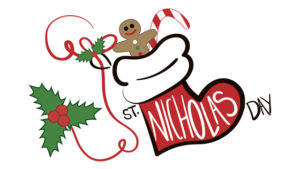 On the night of Dec. 5 German children place a boot outside their front door in hopes they are visited by an iconic figure. When they wake up on Dec. 6 they rush to the front door to find their boot is filled with treats and small toys. The figure is no other than St. Nicholas.

St. Nicholas was born more than 1,700 years ago in Myra, now in modern-day Turkey. The stories about his great deeds spanned the ages of time and influenced countless people. He is said to be dressed in a red robe, a bishop’s hat and a large white beard. Many confuse him with the American version of St. Nick, or Santa Claus. But, the St. Nicholas and St. Nick are far from being the same person.

According to the St. Nicholas Center, St. Nicholas is the patron saint of many groups such as sailors, merchants, brewers and children, to name a few. His legendary charitability, kindness and secret gift-giving led him to be revered all over Europe.

“My daughter gets so excited when she sees the treats and little toys St. Nicholas brought them in the night,” said Anna Schindler, 86th Airlift Wing host nation advisor. “It is such a fun tradition and even though it is not as big of a celebration as Christmas it still makes her so much joy.”

As well as placing treats in boots and bowls, he is known to visit schools with a bag of goodies. The children sing him a song, and in return, he hands out the goodies.

According to The National Geographic Society, he would travel with his companion Knecht Ruprecht, also known as the infamous Krampus. St. Nicholas would hand out treats to good children, and Ruprecht carried a bag to carry the naughty ones away.

Today, it’s a day to have fun and celebrate the man who lived so long ago. St. Nicholas day is an integral part of the German Holiday season with its own set of rich traditions known worldwide. Maybe Americans stationed here can start their own St. Nicholas traditions and continue to spread joy wherever they go.