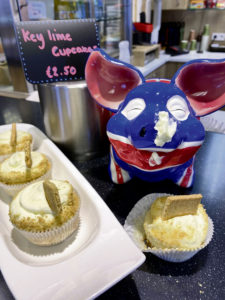 The BritCafe Ramstein is holding a contest until April 30 to “Name the Pig,” its Union Jack-bedecked mascot.  The hereto unnamed mascot can always be seen around the café, greeting customers daily, and has become quite a hit on social media.

“We just felt it was time he had a name,” remarked Gabriella Palmer, BritCafe General Manager. “If you’re going to be a celebrity, people have to know what to call you.”

BritCafe wanted to get their customers involved in the process, too.  “We have people who come in here every day,” Palmer remarked, “They are not just our customers, they really are our community, our friends.”

To build a sense of community here in Germany is the mission of the BritCafe, which is operated by the United Kingdom Support Unit.  BritCafe offers a selection of British specialties, including fresh-baked scones & clotted cream, fish and chips, curry, and soft drinks popular in Britain such as Ribena and Irn Bru.  You can even order a sandwich made-to-order with Marmite or Branston’s Pickles, if that’s what you fancy!

Those wishing to name the pig can drop their suggestions in the box in the café, Building 936 on Ramstein across from the library, or comment on a “Name the Pig” post on BritCafe’s Facebook page. The winning name will be selected and announced the first week of May on the Facebook page.  The customer who suggests the winning name will receive lunch and a drink of their choice, courtesy of the BritCafe!