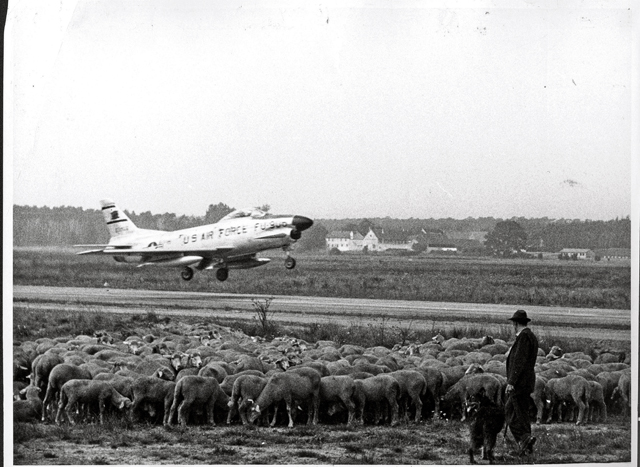 Ramstein AB has played a central role in airlift operations within Europe, Africa and the Middle East throughout the last 70 years.

Though several dates are significant in the evolution of military presence in the area, the anniversary of Ramstein Air Base has been identified as Aug. 5, 1952.

The base is home to the 86th Airlift Wing and supports U.S. Air Forces in Europe – Air Forces Africa, Third Air Force, 521st Air Mobility Operations Wing, 435th Air Ground Operations Wing, and more than 120 mission partners to include the integration and caring for the greater Kaiserslautern Military Community and its 55,000 U.S. service members and their families.

Over the last 70 years Team Ramstein, in cooperation with allied and partner nations, have supported operations that have had a global impact.

The base was a vital component in the sustainment of Operation PROVIDE COMFORT in Iraq between 1991 and 1993 and Operation DENY FLIGHT in Bosnia-Herzegovina in 1993. After the terrorist attacks of 9/11, the base was fully engaged with supporting Global War on Terrorism operations.

In March 2003, more than 1,500 service members were deployed to the KMC with an additional 600 in Operation IRAQI FREEDOM locations. A contingency aerospace staging facility was also set up in the South Side Fitness center to support Operations IRAQI FREEDOM and ENDURING FREEDOM.

Most recently, the wing had a primary impact on COVID-19 operations within the USAFE area of responsibility and through Operations ALLIES WELCOME and ALLIES REFUGE. OAR was the largest humanitarian evacuation in U.S. history, and more than 124,000 Afghans were evacuated from Afghanistan following the Taliban take over in August 2021. During OAR, Ramstein Airmen assisted in the evacuation of more than 34,000 Afghans as the principle node for evacuees in Europe on their way to the U.S.

OAR was the biggest operation to occur in Ramstein’s 70-year history, but the Rheinland-Pfalz region has had a long history of strategic military significance dating back thousands of years.

The earliest evidence of humans in the Palatinate region dates back nearly 12,000 years with Paleolithic hunters and gatherers. However, the earliest settlements can be traced to between 3500-1250 B.C. with pottery pieces and menhirs – large, man-made, upright stones – found near the base in Otterberg and the Landstuhler Valley.

Thirteen B.C. marked the start of the Holy Roman Empire military occupation of the Palatinate due to its threatening position to Germanic tribes. The military occupation eventually expanded and became a large trading settlement away from fighting that was happening on the Rhine River.

After the fall of the Roman Empire, the area was ruled by multiple dynasties. The Royal Court of Lautern — present day Kaiserslautern — was founded around the 5th century.

Construction of the court also brought many castles and fortifications, to include the Imperial Palace in Kaiserslautern. The name “Keyserslutern” first appears in documents from when Johann of Bohemia seized the town in early 1300s.

Development of Kaiserslautern continued slowly throughout the next few centuries. This is partly due to a swamp spanning from Zweibrücken to Homburg, which eventually formed more than 20 lakes and peat bogs. The peat bogs provided the main source of income to the region during a recession in around 1798. As wood became too costly to import, peat bricks became one of the largest exports in the area.

The peat brick industry came to a standstill with the installation of railroads. However, the bricks briefly gained popularity again during a coal shortage due to WWI.

The evolution of the region again moved slowly until Sept. 3, 1939, when France and Great Britain declared war on Germany after Adolf Hitler invaded Poland. While the German military was conquering more territory over the course of the war, the German air force converted part of the autobahn into an airstrip. A new road was built to accommodate traffic that would have used the autobahn, which was later designated as Kisling Memorial Drive.

In 1951 the French occupational forces began the construction of a military base, which was taken over by the U.S. Forces in 1952. The two bases that were created by U.S. forces were designated Landstuhl Air Base in the south and Ramstein Air Base in the north.

Kisling Memorial Drive, which was unsecured and considered off base, served as the dividing line between the two bases. Landstuhl AB supported flightline operations, the air traffic control tower and aircraft hangars. Ramstein AB hosted headquarters, administration and support facilities.

During the base buildup, one third of the area that became Ramstein AB belong to Ramstein-Miesenbach and was appropriated for the construction of the permanent military installation.

In preparation of the planned runway, the impenetrable peat bog had to be drained in a large-scale landfill activity and railroad tracks were constructed to bring in soil and construction materials. At first the runway was rather makeshift and shepherds grazed their flock right next to aircraft landing – to include the F-86 Sabre.

The 86th Air Base Group took over Landstuhl AB April 5, 1952, holding down the fort for the 86th Fighter-Bomber Wing, which was relocated from Neubiberg Air Base, Germany, to create the base’s first operational wing a few months later in August. Meanwhile on Ramstein AB, 12th Air Force had relocated from Wiesbaden and took up residence in the same building used by USAFE-AFAF headquarters today. 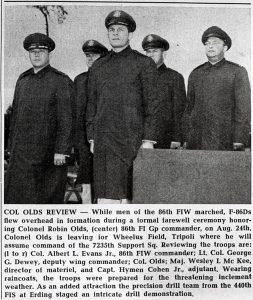 A newspaper clipping from the 1950s shows Col. Robin Olds, 86th Fighter Interceptor Group commander, at his formal going away.

U.S. Air Force airplanes sit on a ramp that is next to a pedestrian and bike path on Ramstein Air Base in the 1950s. 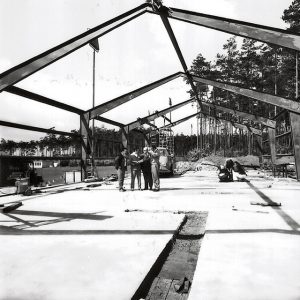 Construction begins on Ramstein Air Base in the 1950s. 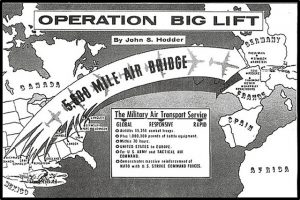 Ramstein Air Base supported Operation Big Lift in 1963. It was the largest movement of troops to date. More than 14,500 U.S. Army soldiers were flown from the United States to Germany to demonstrate the ability of the United States to reinforce NATO forces in Europe rapidly in an emergency. 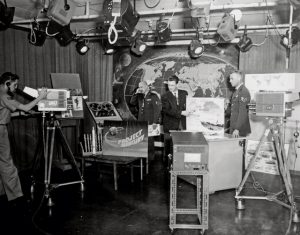 Ramstein Air Base TV discussing Project Mercury in the 1960s. 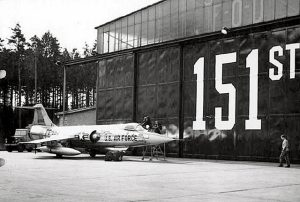 A U.S. Air Force Starfighter aircraft sits in front of the 151st Fighter Interceptor Squadron hangar at Ramstein Air Base in 1961. 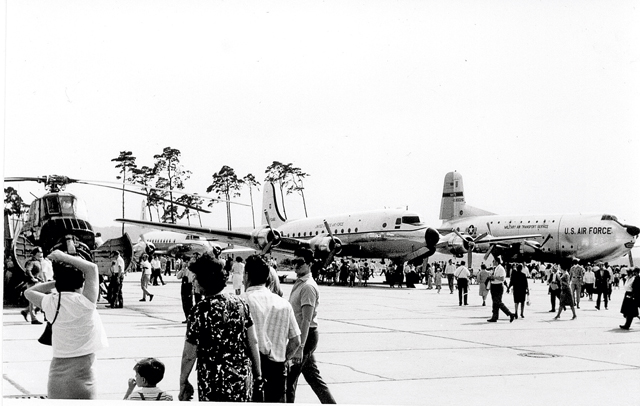 Visitors look at static displays at a Ramstein Air Base open house in the 1970s. 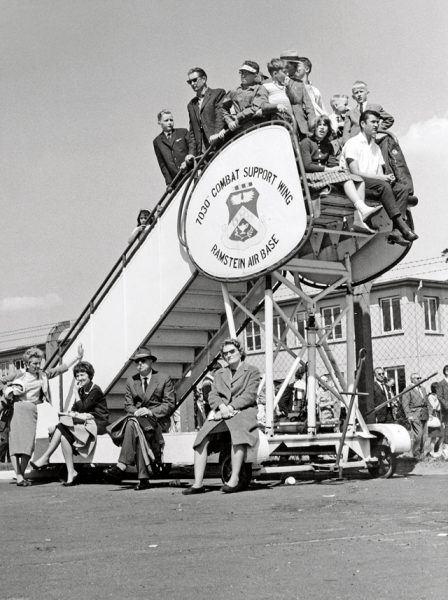 Ramstein Air Base visitors sit on air stairs at an open house in the 1970s. 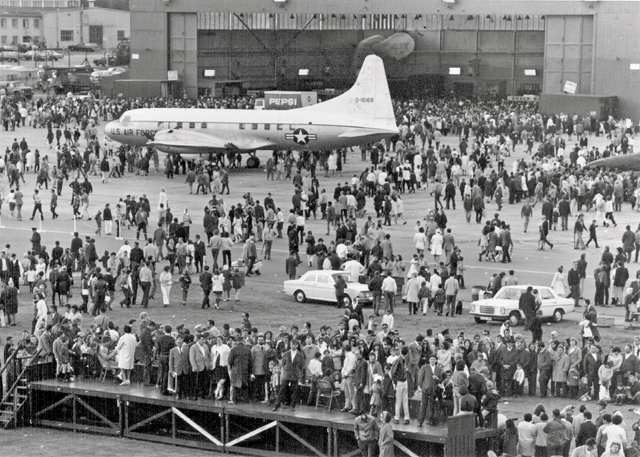 Ramstein Air Base hosted an open house in the 1970s.

At this time the host wing of Ramstein AB was still the 86 FBW with a fighter-oriented mission until the early 1990s. Ramstein AB became an intermediate support base and central overflow airlift hub for American forces deployed to the Persian Gulf following Iraq’s invasion and seizure of Kuwait.

Additionally, Ramstein served as an immediate engine repair facility for deployed F-16 Fighting Falcon aircraft, a collection and distribution center for munitions going to the gulf, and an aeromedical evacuation staging area. 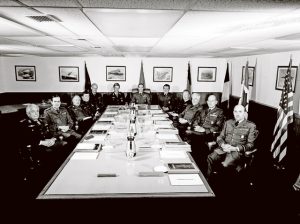 Allied Air Forces Central Europe commanders pose for a photo during the NATO Commanders Annual Conference at Ramstein Air Base in 1981. 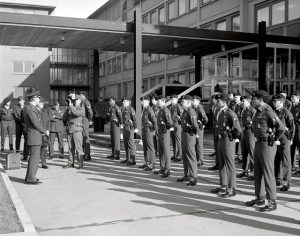 A U.S. Air Forces in Europe commander inspects a Security Forces Squadron at Ramstein Air Base in 1981. 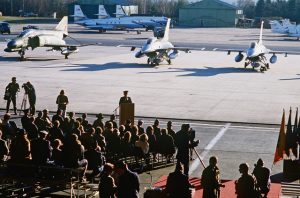 Airmen gather at a ceremony commemorating F-16s replacing F-4s at Ramstein Air Base in 1985.

A detachment of the 37th Airlift Squadron, from the 435th Airlift Wing, arrived to Ramstein AB in the beginning of 1993, and the first C-130 Hercules aircraft arrived in June 1994. The F-16s assigned to the 86 FW were, at this time, relocated to Italy. In October 1994, the 37th AS was officially transferred to Ramstein AB, re-designating the wing as the 86th Airlift Wing. 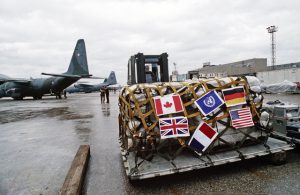 A Ramstein Air Base Airman loads United Nations supplies on a C-130 Hercules aircraft to be delivered to Bosnia during Operation PROVIDE PROMISE in 1996. 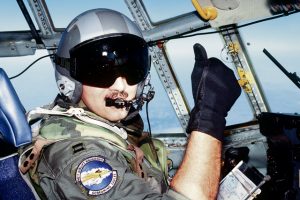 An Airman from the 40th Airlift Squadron from Dyess AFB, Texas, deployed to Ramstein Air Base in support of Operations Joint Endeavor and Joint Guard flies to Bosnia in 1997. 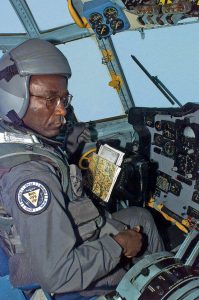 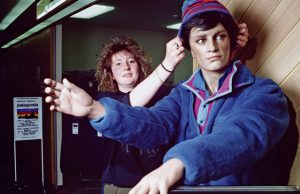 A base exchange clothing sales representative dresses a mannequin in 1990. 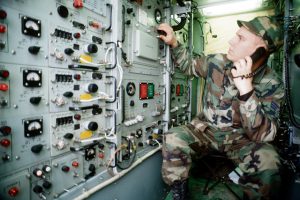 An Airman from the 1st Combat Communication Squadron at Ramstein Air Base makes adjustments to the satellite communications terminal set up in support of Operation JOINT ENDEAVOR in 1996.

By 2003 the 86 AW had grown to include 10 groups. The 435th Air Base Wing was activated to assume control of host wing responsibilities on Ramstein AB and support the KMC in order to relieve strain on the 86 AW.

The next mission changing milestone occurred in 2005 when Ramstein became the ‘Gateway to Europe,’ by taking over the former mission from Rhein-Main Air Base. After World War II, Rhein-Main Air Base was the hub for almost all incoming personnel, both U.S. Army and Air Force. Frankfurt International Airport and the base shared a joint runway, and was an integral part of the Berlin Airlift.

During the Berlin Airlift, which ran from June 1948 to May 1949, allied forces flew food and other vital goods from Rhein-Main AB to West Berlin after the Soviet Union blockaded the city. A stained glass window was installed and commemorated the event at the Rhein-Main AB chapel.

On Oct. 10, 2005, the official Rhein-Main AB closure took place and the premises were returned to the German government. The southern runway at Ramstein Air Base was officially opened in August 2005, which went hand in hand with the construction of the new passenger terminal, the Kaiserslautern Military Community Center (KMCC) with lodging facilities, and Hangar 5, the largest of its kind on a U.S. Air Force installation on this side of the Atlantic.

By the end of 2005, Ramstein had become the ‘Gateway to Europe,’ which again completely transformed the overall mission. Ramstein AB became an international port of entry complete with U.S. and German immigration and customs.

The stained glass window showing the Berlin Airlift was installed in the new passenger terminal on Ramstein AB, and a section of the former Berlin Wall was placed in a traffic circle next to the KMCC.

The command structure of RAB saw its most current change in 2009. Ramstein AB host wing returned to the 86 AW and the 435 ABW became the 435th Air Ground Operations Wing, remaining a mission partner on the base.

Ramstein’s latest change is the closure of the East Gate with traffic redirected through the ROB-MC gate, jointly operated by both the U.S. Air Force and Army, in July.

Through the last 70 years, Ramstein AB Airmen, mission partners, allies and partner nations have seen a significant evolution. We look forward to what the next 70 years will bring.

And the rest, as they say, is history.