Stand by Me (1986)
Gordie, Chris, Teddy and Vern are four friends who decide to hike to find the corpse of Ray Brower, a local teenager, who was hit by a train while plucking blueberries in the wild.
Cast: Wil Wheaton, River Phoenix, Corey Feldman
Creators: Rob Reiner
Genre: Movie – Adventure, Drama

Dead Poets Society (1989)
A new English teacher, John Keating, is introduced to an all-boys preparatory school that is known for its ancient traditions and high standards. With Keating’s help, his students learn to break out of their shells, pursue their dreams and seize the day.
Cast: Robin Williams, Ethan Hawke
Director: Peter Weir
Genre: Movie – Comedy, Drama 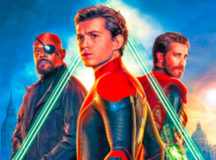 We Can Be Heroes (2020)
We Can Be Heroes is a follow-up to “The Adventures of Sharkboy and Lavagirl.” When alien invaders kidnap Earth’s superheroes, their children must team up and learn to work together if they want to save their parents and the world.
Cast: YaYa Gosselin, Pedro Pascal
Director: Robert Rodriguez
Genre: Movie – Action, Comedy, Drama

The Farewell (2019)
Billi’s family returns to China under the guise of a fake wedding to stealthily say goodbye to their beloved matriarch — the only person that doesn’t know she only has a few weeks to live.
Cast: Shuzhen Zhao, Awkwafina, X Mayo, Hong Lu, Hong Lin
Director: Lulu Wang
Genre: Movie – Comedy, Drama

Frozen II (2019)
No matter how happy Queen Elsa is to be surrounded by the people of Arendelle, she finds herself strangely unsettled. After hearing a mysterious voice call out to her, Elsa travels to the enchanted forests and dark seas beyond her kingdom.
Cast: Kristen Bell, Idina Menzel, Josh Gad
Directors: Chris Buck, Jennifer Lee
Genre: Movie – Animation, Adventure, Comedy

Race to Witch Mountain (2009)
Jack, a taxi driver, finds himself helping two aliens who appear to look like human children and who claim that they are trying to save Earth and themselves from Siphon, a dangerous killer from outer space.
Cast: Dwayne Johnson, Carla Gugino
Director: Andy Fickman
Genre: Movie – Action, Adventure, Family

The BFG (2016)
A young girl, Sophie, befriends a giant, who is an outcast because, unlike others of his kind, he refuses to hurt humans. However, things change after the other giants decide to hunt down Sophie.
Cast: Mark Rylance, Ruby Barnhill, Penelope Wilton
Director: Steven Spielberg
Genre: Movie – Adventure, Family, Fantasy

Zathura: A Space Adventure (2005)
Walter and Danny, are left in the care of their sister, Lisa, and told they must stay inside. They begin playing Zathura, a board game, which they realize has mystical powers when their house is shot into space.
Cast: Josh Hutcherson, Jonah Bobo
Director: Jon Favreau
Genre: Movie – Action, Adventure, Comedy

Spontaneous (2020)
Bolt is a dog who stars in a superhit television show in which he possesses superpowers. However, things change when he believes his powers are real and embarks on a purposeful mission.
Cast: Katherine Langford, Charlie Plummer
Director: Brian Duffield
Genre: Movie – Comedy, Fantasy, Sci-Fi