Beverly Hills Chihuahua 3: Viva La Fiesta! (2012)
When Papi, Chloe, and the puppies are upgraded to a luxurious hotel, their lives are changed for the better. However, the youngest pup, Rosa, feels neglected with the change and it’s up to Papi to show her how special she is.
Cast: Marcus Coloma, Erin Cahill
Director: Lev L. Spiro
Genre: Movie – Adventure, Comedy, Family 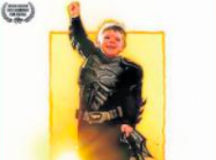 Scoob! (2020)
Scooby and the gang face their biggest, most challenging mystery ever — a plot to unleash the ghost dog Cerberus upon the world. The gang discovers that Scooby has a secret legacy and an epic destiny greater than anyone could have imagined.
Cast: Will Forte, Mark Wahlberg
Director: Tony Cervone
Genre: Movie – Animation, Adventure, Comedy

My Neighbor Totoro (1988)
Mei and Satsuke shift to a new house to be closer to their mother who is in the hospital. They soon become friends with Totoro, a giant rabbit-like creature who is a spirit.
Cast: Dakota Fanning, Elle Fanning, Chika Sakamoto
Director: Hayao Miyazaki
Genre: Movie – Animation, Family, Fantasy

Malcolm & Marie (2020)
A filmmaker on the brink of Hollywood glory and his girlfriend, whose story made his career, find themselves pushed towards a reckoning as a single tumultuous night decides the fate of their relationship.
Cast: John David Washington, Zendaya
Director: Sam Levinson
Genre: Movie – Drama, Romance

Shutter Island (2010)
Teddy Daniels and Chuck Aule, two US marshals, are sent to an asylum on a remote island in order to investigate the disappearance of a patient, where Teddy uncovers a shocking truth about the place.
Cast: Leonardo DiCaprio, Mark Ruffalo
Director: Martin Scorsese
Genre: Movie – Mystery, Thriller

Antebellum (2020)
Author Veronica Henley is finishing a book tour before she returns home. But a shocking turn of events is about to upend Veronica’s existence, plunging her into a horrifying reality that forces her to confront her past, present and future.
Cast: Janelle Monáe, Eric Lange
Directors: Gerard Bush, Christopher Renz
Genre: Movie – Drama, Horror, Mystery

Blade Runner: The Final Cut (1982)
Rick Deckard, an ex-policeman, becomes a special agent with a mission to exterminate a group of violent androids. As he starts getting deeper into his mission, he questions his own identity.
Cast: Harrison Ford, Rutger Hauer
Director: Ridley Scott
Genre: Movie – Action, Sci-Fi, Thriller

The Map of Tiny Perfect Things (2021)
Mark has been reliving the same day, to the point where he can time things that happen around him to the second. At midnight, a thunderstorm strikes. Before the first drop of rain hits the ground, the day restarts.
Cast: Kathryn Newton, Kyle Allen
Director: Ian Samuels
Genre: Movie – Comedy, Fantasy, Romance