Steven Universe: The Movie (2019)
Steven thinks his time defending the Earth is over, but he has to face his biggest challenge yet. Steven’s past comes back to haunt him in the form of a deranged Gem who wants to destroy the Earth.
Cast: Zach Callison, Michaela Dietz, Estelle
Director: Rebecca Sugar
Genre: Movie – Animation, Action, Adventure 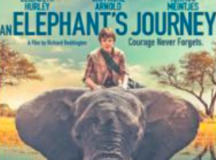 An Elephant’s Journey (2018)
A boy moves away to live with his aunt in Africa, where his life will change. He befriends an elephant, and the duo team up to try and take down a group of poachers.
Cast: Elizabeth Hurley, Sam Ashe Arnold, Tertius Meintjes
Director: Richard Boddington
Genre: Movie – Adventure

Ready Player One (2018)
James Halliday designs a virtual reality and hides the keys to his fortune in it for a worthy player to find after his death. Wade, a teenager, sets out on a quest to find the keys and the fortune.
Cast: Tye Sheridan, Olivia Cooke, Ben Mendelsohn
Director: Steven Spielberg
Genre: Movie – Action, Adventure, Sci-Fi

We Bare Bears: The Movie (2020)
When an agent from the Department of National Wildlife Control tries to ruin their fun, Grizz, Panda and Ice Bear head to Canada and embark on an exciting adventure.
Cast: Eric Edelstein, Bobby Moynihan
Director: Daniel Chong
Genre: Movie – Animation, Adventure

The Crew (2021)
The series takes place in a NASCAR garage where the crew chief butts heads with his new boss and “tech-reliant millennial” staff when his owner decided to retire and let his daughter take over the racing team.
Cast: Kevin James, Jillian Mueller
Director: Jeff Lowell
Genre: TV Series – Comedy

Behind Her Eyes (2021)
Behind Her Eyes is the story of Louise, a single mother who has a one-night stand with a man in a bar, only to discover that he is her new boss, David. Louise’s new friend Adele also happens to be David’s wife.
Cast: Simona Brown, Tom Bateman
Creator: Steve Lightfoot
Genre: Mini-series – Drama, Mystery, Thriller

Firefly Lane (2020)
Tully and Kate are complete opposites, even from the very beginning, but support each other through good times and bad with an unbreakable bond that carries them from their teens to their forties.
Cast: Katherine Heigl, Sarah Chalke, Ben Lawson
Creator: Maggie Friedman
Genre: TV Series – Drama, Romance

Harrow (2018)
Dr. Daniel Harrow, a forensic pathologist, has an unfailing empathy for the dead which helps him solve even the most bizarre of cases. Willing to bend every rule, he is determined to give victims a voice and reveal the truth behind what happened to them.
Cast: Ioan Gruffudd, Darren Gilshenan
Creators: Stephen M. Irwin, Leigh McGrath
Genre: TV Series – Crime, Drama, Mystery