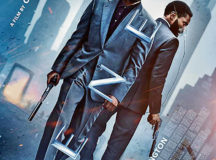 Back to the Future (1985)
Traveling through time, Marty encounters young versions of his parents, and must make sure that they fall in love or he’ll cease to exist. Even more dauntingly, Marty has to return to his own time and save the life of Doc Brown.
Cast: Michael J. Fox, Christopher Lloyd, Lea Thompson
Director: Robert Zemeckis
Genre: Adventure, Comedy, Sci-Fi

Wildfire (2018)
An uncontrolled forest fire rages close to the Canadian border, and when Jerry loses his job, he decides to join the cause of fighting the fire, leaving his wife and son to fend for themselves.
Cast: Ed Oxenbould, Jake Gyllenhaal, Carey Mulligan
Director: Paul Dano
Genre: Drama

Mary Poppins Returns (2018)
Bank teller Michael Banks learns that his house will be repossessed unless he can pay back a loan. Just as all seems lost, Mary Poppins arrives to save the day and take the family on a magical, fun-filled adventure.
Cast: Emily Blunt, Ben Whishaw
Director: Rob Marshall
Genre: Comedy, Family, Fantasy