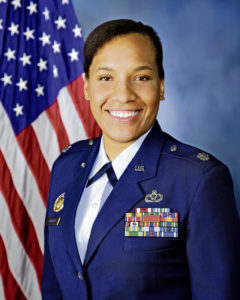 Am I the only one that thought 2020 was a crazy, yet revealing year? From the COVID-19 pandemic, the wildfires that plagued Australia, the missile attack on Balad Air Base, the untimely death of the great Kobe Bryant, to the numerous protests of the racial injustice that struck the United States at her core…2020 was an emotional roller coaster of a year. I would be lying if I told you 2020 did not affect me.

On the contrary, it affected me on a professional and personal level.  But more than that, I wondered how the events were affecting my Airmen. To my surprise, which should not have come as a surprise, my young Airmen were stepping up and leading through the vast array of adversity. And I was very proud.

These young Airmen did not shy away from having those tough conversations, from finding new ways of leading through a pandemic, and displaying maturity and humility enough to listen and show empathy. That is what is so great about the U.S. military; our differences make us stronger, and has since President Truman’s Executive Order 9981 in 1948 was issued to abolish discrimination “on the basis of race, color, religion or national origin” in the armed forces. The U.S. military was one of the first American institutes to integrate, and has been a leader in every respectable category ever since. People around the world look towards the U.S. military as the example due to our values, our resilience, our fight, and our hope. These same pillars are what young Airmen displayed in 2020.

One such great leader approached myself and the rest of my squadron leadership and said, “I think we need to do something. We need to all talk, we need to listen to each other’s stories to get a better understanding of what people are going through and how the events in the United States are affecting us.”

This was well before the Air Force recommended to conduct small group discussion. He saw a problem, and he knew that if it affected one person, it affected us all. So he started the small group discussions within the Fire Department, and then expanded to the rest of the squadron. And guess what…it worked! This young Airman shared his story of the racism, injustice, and judgment he experienced and it opened others to speak up. People listened, they showed empathy, and you heard responses such as, “wow, I would have never known”, and, “that has never happened to me,” and “I could not have imagined” and many more.

One of my Airmen approached me one day and asked if I had a story to share. I paused for a second because I had so many, and I honestly did not want to walk down memory lane of all the racial injustice, bigotry, sexism, and other injustices that I experienced directly and indirectly.

But I told my story. I told them how I was born in a predominantly Black city of Memphis, Tennessee, and my dad’s job transferred us to Atlanta, Georgia. My family and I settled in a small city south of Atlanta called Jonesboro. It is famously known as the location where “Gone with the Wind” was filmed. We moved into a house in a predominantly white neighborhood, and were about one of three Black families. I remember like it was yesterday, after our second day at the house, we woke up to our garage spray painted with, “Go Home …” You can imagine what unspeakable words were on the garage. I recall walking to the grocery store to buy candy and the cashier telling me to “Go back to Africa.” On Saturdays, my dad would take my sister and I to the carwash to help wash his car. In the distance I saw a large crowd gathering at the carwash. I asked my dad what the words on their signs meant. He immediately told my sister and I to get into the car.  He drove us home and dropped us off. He went into his closet and retrieved his shotgun, put it in his car, and went back to the carwash to finish washing his car. I overheard him telling my mom later that night that there was a Klan rally and fundraiser at the carwash. That was the first time I heard anything about the Klan. I was nine. My third grade teacher purposely placed me in the back of the classroom. I did not understand why, I thought it was because I was the tallest one in class.  On the last day of class, she called my mom to have a parent/teacher conference. I was outside the classroom as my mom was speaking to my teacher.  After five minutes, my mom immediately left the classroom, took my hand and walked me out of the school. My mom was, and still is, an educator. My teacher was telling her that she was recommending to enroll me into Special Education and keep me in the 3rd grade that next year. I could not understand. I was making straight A’s. However, my teacher was telling my mom that I was cheating off my classmates, but could not prove it. My mom went to the Principal and then to the Board of Education to file a complaint. Of course my teacher’s false claims did not hold and I moved on to the 4th grade. After that ordeal, my parents sat my sister and I down to have that “tough conversation” of what we may experience in this world due to the color of our skin.  I was nine. This was not the 1950s or ‘60s.  This was 1991.

Discrimination did not stop in grade school, nor college, but I also experienced it while in our Air Force. My first day of active duty was at Little Rock Air Force Base, Arkansas, I can recall the First Sergeant introducing himself and then providing me a list of cities in the area to stay away from. This was 2005, not the ‘50s or ‘60s. One day, I found myself in one of these “cities” pumping gas in my car. Out of nowhere, two large trucks start to encircle me. The guys in the passenger seat begin to light matches and throw them at me as I was pumping gas. I ran inside the store and told the cashier to call 911. I reported the incident to the Office of Special Investigations the next day. I will never forget that day. I recall as a young 2nd Lt. briefing my squadron and someone out in the crowd called me out by my name. I looked towards my leadership for a response, to have my back, or even openly discipline the person. And I got nothing. I was told that I was in a male-dominated career field and to get used to it. I remember requesting initial feedback from my first squadron commander, and he cancelled all eight of my initial requests. And then looking at my male white counterparts asking for initial feedback, and they were receiving the feedback immediately. I had enough. I told myself that I would never do that to any of my Airmen. I would stand up for them, I would provide feedback immediately, have a voice for them when others would not. I still keep that promise and determination to this day.

So to all of the young Airmen who stepped up to the call, thank you for having the courage to say something and make things happen. Leadership can happen at the lowest level, and the Airmen have showed us the leaders that they are. I want to thank my fellow squadron commanders here at Ramstein for also having the courage to have these tough conversations, not only within their Squadrons, but with each other. I hope they all understand of how grateful I am that we can talk to each other peer to peer. Although we have our differences, we can still relate.  It takes courage to step out when you know others will not follow you, and it takes courage to speak up.  The diversity of our military is great, and is what makes us stronger. Let us continue to step out in courage, have the conversations, and lead the way.