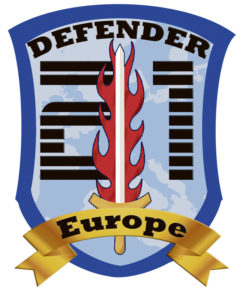 The simulation exercised the V Corps and NATO’s Multinational Corps Southeast’s ability to work as dual Corps under U.S. Army Europe and Africa while training on key war-fighting functions.

The CPX is a critical exercise for the recently-activated V Corps as it builds readiness and operational capability to receive certification and assumption of mission in the European theater of operations toward the end of 2021 and become the U.S. Army’s forward deployed Corps in Europe.

“We are excited to be back in Europe and soon to be under U.S. Army Europe and Africa as a key warfighting formation,” said Brig. Gen. Matthew J. Van Wagenen, deputy commanding general – maneuver, V Corps – Forward. “There is a lot of excitement for V Corps. We are definitely European facing. This is where our concentration will be.”

The 7th ATC’s JMSC provided Van Wagenan and the roughly 100 V Corps Soldiers at GTA the virtual and constructed simulation space to exercise in a global environment from the Corp’s headquarters in Fort Knox, Kentucky, and in allied commands throughout Europe. The exercises’ real-world operations involved approximately 2,000 personnel across 104 countries and two continents.

The simulation included several units from ally and partner nations supporting in a variety of roles.

Three brigades- the Pinerolo and Aosta brigades from Italy and the Brigada Galicia VII from Spain – came together for the first time as part of the Italian Acqui Division to serve as the divisional element under V Corps.

“Participating in this complex joint multinational exercise was a great opportunity to see how common procedures and communication systems between the U.S. Army, NATO armed forces and partners can work and interact together,” said Lt. Col. Leonardo Mancino, officer in charge, Pinerolo Brigade. “It was also a unique chance for junior officers and young NCOs to grow up and share this experience within their own units back home.”

Training in exercises like the CPX is important for units like the Aosta Brigade because it gives them the opportunity to train in complex scenarios with several international allies and partners said Lt. Col. Claudio Castiglia, officer in charge, Aosta Brigade.

“It was a great opportunity to be involved in this [exercise] in terms of interoperability,” said Castiglia. “I think we showed that we are fully capable to resolve crisis and restore stability in the simulated region.”

Lt. Col. Greg Pavlichko, chief of operations for JMSC, said JMSC is capable of running simulations to scale from battalion to the 4-star commands, but that the DEFENDER-Europe 21 CPX was the largest simulation of its kind ever hosted by JMSC.

“We are learning a lot and understanding what works and what we can do better next time, so this is iterative,” Pavlichko said. “But, the foundation is there. We support exercises for everyone [within U.S. Army Europe and Africa].”

Pavlichko said the JMSC simulation provides headquarters elements the opportunity to do staff analysis and work their plans to see if they would work on a battlefield without having tens of thousands of troops, their vehicles and equipment spread throughout Europe and restrained by funding requirements. The CPX is also vital for promoting interoperability between the U.S. Army and its allies and partners.

“This CPX is really important to us,” said Croatian Maj. Gen. Denis Tretinjak, commander of Headquarters Multinational Division-Center. “As a real combat environment, although simulated, it provides an excellent opportunity for us to improve our capabilities to plan and execute operations at the division level. This is an exceptional opportunity for us to train our capabilities.”

Pavlichko said V Corps is the overall headquarters for the training audience, but that most of the down trace and combat units participating in the CPX were allied or partner nations.

“This is truly a partnership building exercise,” Pavlichko said. “We have a lot of units here from our NATO alliance, and this is the first time we have trained together since COVID happened. We were able to mitigate the COVID risk through vaccinations [roughly 90 percent of participants], testing and social distancing.”