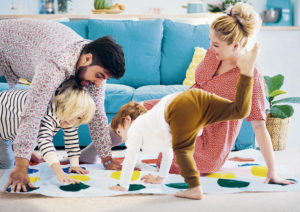 The holiday break looms ahead. On one hand, we’re thankful for the break from work and school, and on the other we quickly tire of the hustle, bustle, and commercialism of the season. Growing up in the ’80s, a deck of cards or a board game could compete with the lure of video games, which were limited to geometric shapes moving jerkily across the screen and oversized joysticks.

These days, our highly stimulating and brain addicting screens impede our willingness to abandon the gadgets and interact with each other. Research indicates that most families, 86 percent, consider watching movies and TV their favorite family time activity. Almost half of people polled named playing video games. Out of the top five activities, three involved “screens.” The definition and practice of family has significantly shifted in the past 20 years.

But families that adopt weekly or monthly rituals of game nights during the dark winter season reap numerous rewards. Some parents try to get closer to their children through screens, friending them on Facebook or playing games: but for every hour you spend on these activities is one not spent with your child in the present, physical moment. Those face to face moments are when children bond the best. Consider how limited dating would be if most interactions involved only going to the movies or sending texts; a relationship built on these activities is likely to be shallow.

Despite the fact that interacting without screens is not very popular, research shows that families that play games together often have less conflicts. Play also plays a vital role in development.

Naomi Younggren, Ph.D., works as the MEDCOM EDIS CSPD coordinator and specializes in early development education. Younggren encourages families to understand how powerful play can be.

“Think of play in the broader sense of playful interactions, and not just play with toys,” she said.

Younggren encourages parents to look at interactions with parents and peers as the foundations for learning. She lists reading, matching laundry, brushing teeth and going to the park as excellent “play” learning opportunities.

Sure, most children are going to fight at first, and parents may feel they have to beg or bribe their children to play with them. Most children, however, quickly warm to the ritual or secretly relish it; at the very least, they will remember it for years to come as a special season during the year.

When you find yourself desperate for something to do that doesn’t involve money or electronics, or to build a ritual that protects your family from the wintertime squabbles, turn to these game night ideas.

For tweens and teens

Dr. Krystal White is a pediatric psychologist at Landstuhl Regional Medical Center, who specializes in community assets and developmental disorders.

Don’t be a Grinch: Reducing conflict during the holidays

It is just as easy to be irritable and mean during the holidays as it is to be generous and...