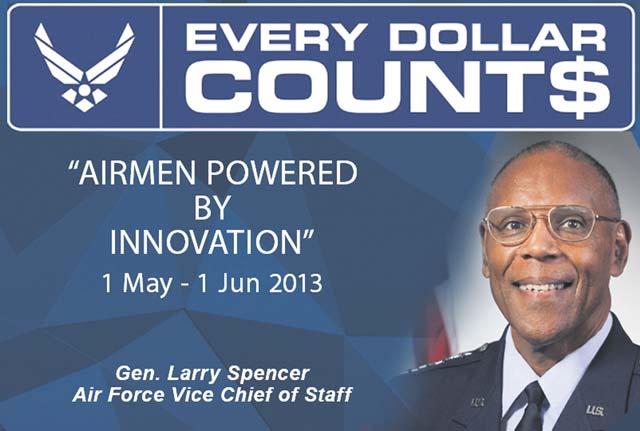 WASHINGTON — With budgets shrinking, Air Force leaders are calling on Airmen to share their best money-saving ideas through the Every Dollar Counts campaign.

In the wake of sequestration, the initiative marks a cultural shift that empowers Airmen to find and recommend areas for savings that may be used to support readiness needs, said Air Force Vice Chief of Staff Gen. Larry Spencer.
Beginning May 1, Airmen can submit their cost-reducing ideas via the Airmen Powered by Innovation websites while at home, the office or on their smartphone. Links to those sites will be released soon.

Both uniformed and civilian Air Force members can participate in the monthlong open call for ideas and share their creative and efficient ways to save money and time.

“When things get tough, Airmen figure out a way to get it done,” Spencer said. “We have some of the most innovative folks in the world, so I know there are ideas about how we can do things better.”

Spencer’s resource management and budget-related background amplifies the urgency to mine those ideas.

“We stopped flying one-third of Air Force active-duty combat-coded fighter squadrons in April, and we’re projected to slow down or stop the flow of aircraft and engines in the depots,” Spencer said.

Furthermore, he said, the Air Force must trim about $11 billion in the last half of fiscal year 2013. Additionally, our overseas contingency operations funding is almost $2 billion short so we have to make up that difference as well.
And the challenge is compounded by the sequester timeline, which officially began March 1.

“We have to squeeze a year’s worth of cuts into about six months,” Spencer said of the Air Force budget. “So there’s a lot of money to be taken out of our budget in a short period of time … I’ve never seen anything quite like it.”
Airmen at every level should feel less encumbered by perhaps dated or unnecessary Air Force Instructions or guidelines when brainstorming cost-cutting measures, the general said.

“Airmen Powered by Innovation means go into that file of good ideas that were maybe ‘too hard to do,’ pull them out and submit them,” Spencer said. “If it’s a good idea and requires an Air Force Instruction change, then we’ll see if we can do that.”

Spencer wants Airmen to submit their ideas regardless of the idea’s potential savings.

“We’re taking every angle we can to manage our money and ‘buy’ as much mission as we can,” he added. “In that sense, every Airman, whether they’re at a wing or headquarters can help.”

Spencer said the Every Dollar Counts campaign does not just focus on our wings but includes those large centrally managed accounts as well.

“The Centralized Asset Management Office at Wright Patterson AFB manages the money we spend on flying hours, sustaining space operations and depot operations — over $16 billion — so we’re taking a close review of that account to determine how we can stretch those dollars,” Spencer said. “This is an opportunity to not only look at homegrown ideas, but broader ideas that affect the larger Air Force as well.”

The general expressed optimism in quickly finding solutions through ideas.

“Innovation is what we’re all about,” Spencer said. “This is our family and we’re going to get through this because we’ve got great Airmen to help see us through this.”