Flensburg — city on a fjord with Danish flair

Flensburg, a quaint city situated just five kilometers south of Denmark and on a picturesque German fjord, is well worth a stopover going to or coming back from Denmark. Or, to enjoy a longer stay along the Baltic Sea to get a feel for its hanseatic atmosphere and Danish way of life.

The city has a population of about 89,000, but with 2,500 Danes or descendants, they make up the largest minority due to the proximity and historical ties over the centuries. The Danish easy-going and cheerful lifestyle is considered to be “hygge,” a non-translatable term.

The first scenic highlight you will encounter is the sparkling blue harbor in the city’s center, lined with sail boats, private yachts and tall historic three-masters dangling in the sunlight. Take a mini cruise on MS Viking in the fjord passing by the German Marine Academy in Mürwik, a beautiful vista of the old marine town, a wharf, seven beaches, a glimpse of Denmark and its two small Ochseninseln (Ox Islands) to reach Glücksburg, the northern most town in Germany.

Disembarking the ship, you can sunbathe on the powdery white beach in typical Strandkörbe (beach baskets), visit the elegant Strandhotel Glücksburg, built in the early 20th century, take a stroll through the forest with wooden art sculptures along the way, to finally discover its water castle Glücksburg and neighboring rose garden, or just relax in the sauna or steam bath in the largest thermal spa in Schleswig-Holstein.

Back on board enjoy the breeze and small sail boats racing with the wind to encounter a magnificent view of the skyline with the waterfront, church towers, the Maritime Museum, museum wharf, sea food restaurants and cafés along the route.

Once back in town stroll along the waterfront and try a Backfischbrötchen (fried fish roll), a regional specialty, on the boardwalk or watch the sea gulls noisily argue. Nostalgic steam boat “Alexandra” is on display and is scheduled to cruise again after its renovation.

The over one-kilometer-long pedestrian zone is just parallel to the harbor and rich in sights to see. Starting from Nordertor, there are quaint fisher houses with extremely steep roofs and half-timbered facades, mixed within an array of buildings of various architectural styles and eras, and red brick churches. Marvelous merchants’ and captains’ houses as well as impressive storage buildings won’t let you stop from clicking your camera. 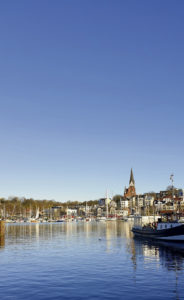 The Danish library and Flensborg Hus, a cultural and event center, are dedicated to the Danish minority in Flensburg. See the oldest fishermen’s pub along the way leading to Nordermarkt with cafés, restaurants, typical maritime shops and Danish bakeries with delicious pastry and licorice. The walking area is lined with a multitude of narrow picturesque alleys leading either down to the harbor or into courtyards, each holding cultural or gastronomic surprises.

Crossing one street along the route, you may be surprised about the unusual pedestrian traffic lights, same gender couples holding hands, which underlines the open spirit of the Flensburgers and cultural diversity.

Südermarkt on the south end of the pedestrian zone has a farmers’ market every Saturday with regional fruits, vegetables, fresh fish, herbs and flowers and offers the ideal place to enjoy an ice cream or a cappuccino.

Further up the surprisingly steep hills, as northern Germany is commonly known to be rather flat, you can visit the Naturwissenschaftliches Museum Flensburg (scientific museum) and stroll around Museumsberg to encounter the giant Idstein Löwe (lion) face-to-face and experience a fantastic view over the harbor.

Your walking tour could end at Rote Strasse, a narrow cobblestone street with creative tiny shops, a barista café in the courtyard, handcrafted candles, jewelry and art as well as tea and flower gardens. The famous Rum Museum was established after the city flourished by importing rum from the Caribbean in the 19th century.

If you aren’t tired yet and ready for another walk, find small surprises along the Kapitänsweg (captains’ route), marked with small metal signs in the sidewalk and trace the steps of former captains who sailed the seven seas, the route leading to the east side of the harbor.

One of the seven beaches is Wassersleben in the north with magnificent white sand, great for relaxing, offering a range of water sports and is only one kilometer away from the Danish border. It is also ideal for children with shallow water, minimal tide and a colorful seaside playground. The Industrie Museum Kupfermühle (copper mill) is just around the corner and exhibits a 400-year-old water wheel to process metal and other historic industrial machines.

Flensburger Pils, a famous beer sold in special bottles with ceramic “popping” caps, is brewed in the most northern brewery, which offers tours upon appointment.

As small as the city is, it has two universities, the Hochschule and the IU International University with over 9.000 students, many from Scandinavian countries, again giving the city a young and fun atmosphere.

Last but not, least, the Kraftfahrtbundesamt (federal traffic administration) is also located in Flensburg, dreaded by all German drivers who collect points for violating traffic rules.

Flensburg is the most enchanting city in northern Germany that I have ever seen and the friendly, open-minded Flensburgers welcome you to a stopover or long visit, I stayed in “Flensi” for six months!