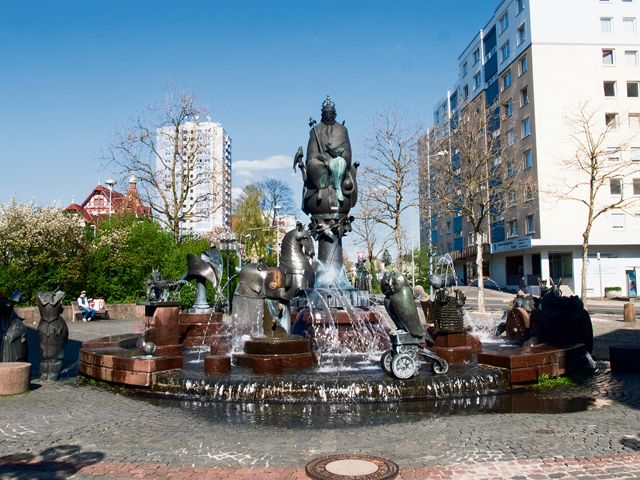 The Kaiserbrunnen (Emperor’s Fountain) at Mainzer Tor in Kaiserslautern was designed by Gernot Rumpf, a Kaiserslautern sculptor in 1987. The bronze fountain features current, as well as important historical tillustrations of the City of Kaiserslautern.

The most prominent feature is a sculpture of Emperor Friedrich Barbarossa (1122-1190) situated in the middle of the fountain. In 1152, Emperor Barbarossa had an imperial palace (Kaiserpfalz) commissioned in the settlement which, over time, has turned into what is now the City of Kaiserslautern. Emperor Barbarossa used the palace as a residence when preparing for crusades and enjoying his favorite pastime, hunting.

The second person featured on the fountain is King Rudolf of Habsburg (1218-1291) who gave Kaiserslautern its city rights in 1276. Gaining these city rights meant certain privileges, for example, more independence in the governing of a city or holding a market.

On the fountain is also a coat-of-arms. As the heraldic animal for the City of Kaiserslautern, a fish can be found on the fountain as well. Another creature that is sculpted is the “Elwedritsche,” a regional fabled birdlike creature, which is said to only be caught with a giant net on a full moon night. The owl stands for wisdom and Kaiserslautern’s history as a city of school and university, the elephants and the city towers symbolize strength of the former city walls.

An Opel engine and a Pfaff sewing machine on the fountain represent the city’s economic development after World War II, while the wheels stand for the Technical University of Kaiserslautern and technical innovation. A cask bucket symbolizes the former Eisenwerke (iron works).

You might have noticed that Kaiserslautern is famous for soccer. A soccer ball signed by legendary Fritz Walter is therefore part of the fountain as well. Fritz Walter from Alsenborn played for the local soccer team 1. Fußball Club Kaiserslautern for decades and led the German national team to its victory during the Soccer World Championship in 1954.

Other objects that can be found on the fountain are Napoleon’s hat for the time that Kaiserslautern was governed by France after the Napoleonic Wars, a horse armor of the knights of the Rittersberg, as well as a donkey and a horse.

A basket with honey marks traditional beekeepers and a wagon with grapes characterizes a former viticulture area near Kaiserslautern.

An estimated 100,000 Palatines left the area and settled mainly in Pennsylvania in the 18th and 19th centuries, and the emigrant ship with a cloud full of dreams above its sails symbolizes the wave of Palatinate emigrants who sailed to the United States with hopes of a prosperous future.

Elegant photos can be taken as a lady or a knight behind the two sculptures on the side of the fountain.

Last but not least, a mouse is hidden among the other figures, it doesn’t hold any historical significance, but is the sculptor’s “signature” or personal identification mark. Visit the fountain, get a glimpse of history and see if you can catch the mouse!

If you would like to see more of artist Gernot Rumpf’s creations plan a visit to the Glockenbaum fountain in Mainz, the Elwedritsche-Brunnen in Neustadt/Weinstrasse and the Papyrusbrunnen in Mannheim.