Get to know Ramstein’s new commander

Today the 86th Airlift Wing bids farewell to Brig. Gen. Mark R. August as Brig. Gen. Josh M. Olson assumes command of the World’s Best Wing.
Like his predecessor, this is not Olson’s first assignment at Ramstein Air Base. He spent nearly two years commanding the 37th Airlift Squadron from 2011-2013 as a lieutenant colonel. Now, seven years later, he returns to the Kaiserslautern Military Community bearing a new rank and greater responsibility. 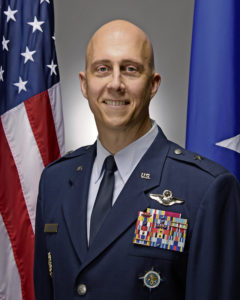 His biography outlines a variety of assignments, academic achievements and accolades. Olson is a seasoned wing commander with former experience leading the 22nd Air Refueling Wing at McConnell Air Force Base, Kan. It was under his command that the 22nd ARW brought home Air Mobility Command’s 2019 Gen. Mark Welsh III “One Air Force” Award and made history by receiving the KC-46A Pegasus refueling aircraft. In addition, McConnell AFB was a finalist for the Air Force’s 2019 Commander in Chief’s Installation Excellence Award, which Ramstein AB ultimately won.
No stranger to airlift, Olson is a command pilot with more than 2,900 hours in refueling tankers like the KC-46A, KC-10 and KC-135 as well as Ramstein’s workhorse, the C-130J Super Hercules.
Olson arrives at Ramstein after a year at Scott Air Force Base, Ill., working as the executive officer to the commander of U.S. Transportation Command. In January, the U.S. Air Force chief of staff announced Olson would be taking over as commander of the host wing at Ramstein AB.
He is joined by his wife Barbara and sonLuke. Their daughter Alexa is attending college in the United States.