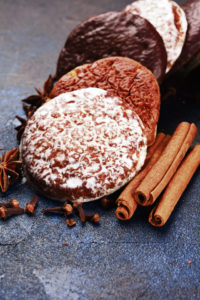 “Lebkuchen,” or gingerbread, is one of the most popular, oldest and beloved Christmas cookies in Germany. A big variety is available — there are lebkuchen in different shapes, with chocolate, nuts or marmelade filling.

It’s not clear as to where the name “Lebkuchen” comes from. It has nothing to do with the word “leben,” to live. It most likely stems from the Latin word “libum” meaning flat cake or sacrifice cake. In early times, people sacrificed to gods what was most important to them: bread, also called “Laib.” Throughout the years “Laibkuchen” turned into “Lebkuchen.”

Lebkuchen go back to Teutonic times. Teutones thought that the predecessor of lebkuchen, the “Honigkuchen” or honey cake, had magical powers and helped keep bad spirits within bounds.

Also, the Egyptians, Romans and Greeks believed that honey came from the gods and had magical and healing powers. They took honey cakes to the battle and placed them as burial objects into Egyptian kings’ graves.

In the Middle Ages, gingerbread was used as a means of payment. Vassals paid their feudal duty with the specialty, and dukes and civil servants were bribed with it. It was known for bringing good luck at wedding and baptism ceremonies. Gingerbread was difficult to obtain by most people, because it was a valuable specialty made of expensive ingredients.

In the 11th century, a handwritten document from a monastery near Lake Tegernsee in Bavaria mentioned the “Pfefferkuchen,” pepper cake, for the first time. In 1293, the first gingerbread baking guild was documented in Silesia. In the 14th century, the making of gingerbread became popular in Munich, Frankfurt, Basel, Vienna and Nuremberg, which is famous for its “Nürnberger Lebkuchen.”

Beekeepers from a little town near Nuremberg helped bring fame and a good reputation to the town. With plenty of fir and pine trees, oak trees and linden, sloe trees, hazelnut bushes, spurge-laurels and heather growing in the forests near Nuremberg, enough nectar was available for the bees. The so-called “Zeidler,” forest and house beekeepers, founded a large guild, and harvested the honey from honeycombs in tree holes or crevices.

At that time, honey was the only existing sweetener. Due to worldwide commercial connections of local merchants, the bakers of gingerbread were able to receive all necessary ingredients — pepper, ginger, cinnamon and other spices.

In the Nuremberg area, the beekeepers maintained about 50 farms and in 1350, Emperor Karl IV gave them the privilege of being the only people allowed to harvest the honey in his forests. The beekeepers wore their own costumes, crossbow and arrows and were the emperor’s bodyguards. They also maintained their own court of justice where they handled all crimes committed in the forests and against the beehives.

In 1796, Prussian occupants limited this jurisdiction, and three years later, they took it away totally.

Today the making of gingerbread is still considered an art clothed in secrets. The modern production still relies on old recipes that masters have passed down from generation to generation.

Gingerbread is a must when arranging a Christmas cookie plate in Germany.