If April showers bring May flowers, what do May flowers bring? In this case, it’s a quality of life improvement to an area of Army Family Housing here.

Upon arriving at the Baumholder Military Community in September 2019, Harold Schlund and his wife, Army Capt. Estela Schlund of the 254th Medical Detachment at Baumholder Army Health Clinic moved into a stairwell apartment on Smith Barracks.

“Can you imagine a gardener living in a fourth floor apartment with no balcony?” lifelong gardener Harold Schlund joked. He began searching for an area to garden and came up with the idea of creating one for the community.

“We had a meeting with Harold, and in that meeting we could see that his vision was definitely doable,” Gillis said. “I had a good feeling when we got done with the meeting.”

Gillis said standing up the garden was a team effort. He surveyed possible sites and worked with the Environmental, Real Property and Master Planning divisions of the garrison’s Directorate of Public Works to get the garden site approved and ready for use.

“Harold’s vision really opened up a lot of possibilities,” Gillis said. “I think with what’s going on right now, people are looking forward to just getting out into nature and this garden could be a big part of that.”

Due to COVID-19 physical distancing restrictions that prohibit the gathering of people, the garden can’t be open to multiple gardeners from different households at the same time yet. However, Schlund and Gillis plan to make it a community garden once restrictions are loosened.

In the meantime, Schlund and his family, along with one other family housing resident, are getting the garden started with flowers, herbs and vegetables.

“We garden as a family — it’s a family project. With the current restrictions on traveling and everything else, it’s a great way to use our time,” he said. “We get physical activity, fresh air — I think it’s a really positive activity.” 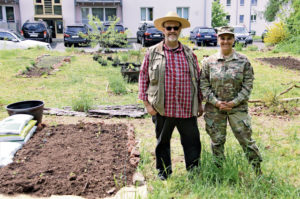 Schlund’s 16 years as a military spouse have allowed him to live in several locations around the world — and tend to several gardens while doing it. He said one day he would love to see the military organize spaces for gardening at every installation.

“As a military spouse, every time you PCS you have to start over with your garden,” he explained. “My idea is to organize community gardening – every time you PCS, you just take over [in the garden] from somebody who moved.”

Now that the garden has been established, this will be a possibility for future Baumholder housing residents.

“I’m so in love with this project,” added Estela Schlund. “This garden is an initiative that came from the heart of people who live on post – family members who, like us, live in apartments and don’t have a piece of green of their own.”

“[The garden] engages the family members, the spouses and the kids; it creates a sense of community,” she continued. “I think a lot of people will love to garden and have this opportunity in the Baumholder community.”

Baumholder housing residents who are interested in getting involved with the community garden can reach out to Gillis in the Housing Office at 0611-143-531-3008.