Insects, their importance for mankind

Why the hornet is your friendly neighbor

While summer may be the most beloved time of the year for many, it is also an active time for certain insects: hornets, wasps, bees and many others.

In an effort to raise awareness about stinging insects, in particular, the 86th Civil Engineer Squadron’s environmental section provides facts and information to help reduce misunderstandings. The intent is to build admiration and recognize why insects of any kind are very precious and why hornets do not intend any harm to you and your family.

One point to note is German environmental laws are stricter than those in the United States when it comes to insects. Hornets, and many other insects, are protected by official regulations. Violations, such as killing or capturing them, or destroying their habitats, are punishable by law, and usually result in fees and fines.

Wasps, bees, hornets and other insects have been on endangered species lists for many years due to the significant decline in their numbers as a result of extensive use of pesticides, diseases and dwindling food sources. 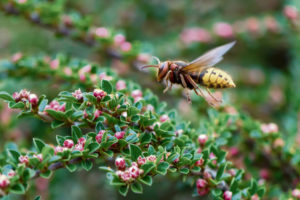 Most people’s fears of bees, and bee look-a-likes, are fueled by lack of knowledge or by knowing someone who was stung or is allergic to bee stings.

Hornets, for sure, can be scary due to their size, but are actually good neighbors. By sticking to a few simple rules, even a person with allergies has nothing to fear.

Hornets are actually less aggressive than wasps and sting less often. It will only sting if it feels trapped or threatened. So do not provoke them! Stay at least 10-13 feet away from the hive’s main entrance — they will remain totally calm. You’ll actually be able to observe them fly around and see how they can be useful.

One hornet can hunt and eat up to one pound of other insects a day. They especially like to nourish on wasps, flies, spiders, caterpillars and mosquitos! Having a hornet nest near your home is the best way to prevent other unwanted insects from entering your house.

The lifespan of a hornet queen is up to 12 months and her workers can live up to three to four weeks. As soon as the new queen is born, which usually happens around October, the old queen will die and her heir will fly away to build a new hive somewhere else. When the nest is empty is the only legally acceptable time to remove the empty nest (by an expert only).

The hornet’s “little sister”, the wasp (protected as well), is known to be more aggressive than the hornet. Since wasps are known for inhabiting one nest for a longer period, the best time of the year to legally remove them is in April (nest building phase) or in autumn by a certified expert. Removing a living hive is not easy and not always successful.

Education about insects is a very important first step toward safety and a healthy environment. Act responsibly to co-exist with our small neighbors and follow the rules and guidance provided by the host nation.

This is how the insects differ