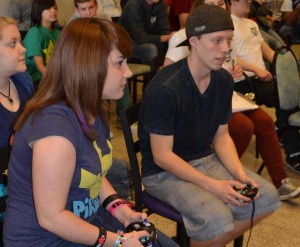 With KMC Arena’s largest tournament to date and a head count of over 50 participants, a rough estimate of 126 games of Super Smash Bros. Melee and Brawl were played. From 16:00 until 23:00, on May 4th at the KMCC, gamers of all ages battled it out until only one smasher remained.

We had a chance to talk to OhNo! after the event and ask him a few questions on how he felt about the event.

KMC Arena: There were a lot of really intense match’s at the event. Which was the hardest or most interesting match for you?

OhNo!: “I know it’s kind of cliché, but the final match best of 5 was the most intense for me. My opponent brought a challenge and actually forced me to change my tactics 3 different times throughout our matches. He really pushed my abilities to the limit and made me glad that I knew my character so well.”

KMC Arena: How did it feel to win both the Melee and the Brawl tournament?

OhNo!: It was a very satisfying feeling. This was the biggest tournament I have ever been in and was a relief getting that final KO for the first place win.

To read the full interview and get the latest information on KMC Arena’s events, visit our website in June after its unveiling at: www.kmcarena.com. Or visit us on our facebook page at: www.facebook.com/KMCArena.

KMC Arena hosts video game tournaments on Ramstein AB for the purpose of providing a fun and constructive outlet for the youth, service members and military families in the KMC area. Currently, KMC Arena is planning for their next tournament which will be “Injustice: Gods Among Us” on June 15th.