U.S. Air Force C-130 pilots are commissioned officers who learn to command their aircraft with complete control while upholding roles as leaders and role models. Maj. Mary Baldwin is one such C-130J Super Hercules pilot who flies the skies over Ramstein with the 37th Airlift Squadron.

Surrounded by students who had the same dream, Baldwin’s ambition to become a pilot was born while she attended the U.S. Air Force Academy.

To become a pilot, Baldwin underwent 1.5 years of training and gained extensive knowledge on air navigation, meteorology, aircraft operations and mission tactics. She also succeeded in other areas, such as passing three weeks of survival, evasion, resistance and escape training in a rugged, unforgiving environment.

“Pilot training was the beginning of my continuing lesson in simply doing my best and being okay with the results – even if it’s not perfection; it never is,” Baldwin said.

Baldwin has tackled a variety of challenges over her 11-year career. Her biggest obstacle was learning to adapt to continual upgrade training, yet she persevered to achieve qualifications to fly three aircraft, including the C-130H Hercules and the T-1A Jayhawk.

After completing several assignments, including four years as a C-130J instructor pilot, Baldwin accepted an assignment with the 37th AS.

Today, Baldwin supports one of the world’s largest Air Force bases by delivering supplies to bases in Africa and Europe via aerial transport as well as cargo or personnel drops. The mission also includes transporting patients in critical condition to life-saving facilities.

“My favorite part of being a pilot is being involved in the mission,” Baldwin said. “I like being part of a team with a goal and working together to accomplish it.”

One of the challenges women in the military and aviation community face is the lack of female mentors to give advice, Baldwin said.

Yet, Baldwin is grateful to the role models who paved the way for her.

“The people I looked up to, who planted the seeds for me to join the Air Force and become a pilot, were men,” Baldwin said. “They mentor me now and inspire me to work hard and perform well.” 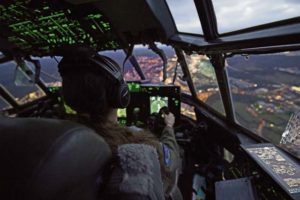 Baldwin enjoys being a pilot and uses her experience to mentor others.

“I strive to be the best person I can be, and hopefully that has a positive effect on others – male and female,” Baldwin said.

To find out more about becoming a pilot in the U.S. Air Force, talk to a local recruiter or visit https://www.airforce.com/careers/detail/pilot. To contact the United States Air Force Recruiting Europe office, call commercial at 06371-47-3430 or DSN 480-3430.

Now’s the time to stream or rent some of the best movies of 2019 that probably went under your radar!...