The Unnerhaus Culture Club, a non-profit organization, will sponsor its 16th anniversary jazz festival with high-quality world musicians inside the atmospheric courtyard of Nanstein Castle. 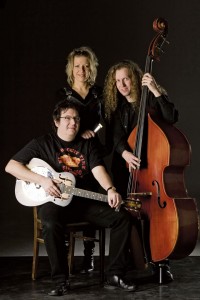 The club expects visitors from the KMC, Germany and around Europe. The festival will kick off at 6 p.m. July 27 with the evening’s first top act: one of Europe’s best trio’s, the United Blues Experience.

“The band is from Poland and Bavaria and presents an acoustic blues session with Europe’s best female mouth harp player, Miss Kossowska. Their theme is back to the roots of deep blues with a fascinating feeling and grooving spirit,” said Willi Ningelgen, a member of the Unnerhaus Culture Club.  “The audience will be thrilled by their musical talent.”

They will be followed by the German duo Making Blues. Ignaz Netzer (guitar) and Albert Koch (mouth harp) will go even further back to the roots of U.S. Southern States Blues. In Germany, Ignaz is considered the “Großmeister” of classic blues with a guitar style similar to John Lee Hooker, Lightning Hopkins, Muddy Waters and Johnny Guitar Watson.

“Albert, our local hero from Kaiserslautern, is one of the best mouth harp players in Germany,” Ninglegen said.

The next top act will be the Paris Washboard jazz quartet from Paris, known as one of the best groups in France. They present the finest New Orleans and Kansas City swing with hot-dance elements from the 1920s and 1930s and bring back the real prime time of great American traditional jazz music.

The first day will come to a close with the local stars Smitty, Molli and Corinna around midnight in the Castle Battery Tower.

On July 28, the festival will continue at noon with the Dixieland jazz group Haufe Leit. The group had been invited to the traditional New Orleans City “French Quarter” festival, where only the best Dixie jazz actors are authorized to play.

“They are as famous as pop stars in their homeland France, and they can be described as the enemies of sorrow and the lost property office of happiness,” Ningelgen said.

The festival will end around 6 p.m.

Tickets will be available at the entrance to the castle. However, take the chance and get a much cheaper ticket in advance at the healthy food store Hackler (call 06371-71549) or at the bookstore Boehm at the Landstuhl train station (call 06371-2742 or visit www.unnerhaus-kulturclub.de/burgjazz). Advance tickets for single days are much cheaper than daily tickets.
An advance ticket for both days is €30. Children under 12 are admitted free.

Parking is in easy walking distance to the castle. Food and beverages will be served, and the castle location is safe.

The Culture Club is a non-profit organization and proceeds are only being used for cultural events.