With senior leadership, experience and feisty supporting casts leading the way, the Ramstein boys and Kaiserslautern girls both came away victorious in their crosstown basketball rivalries. 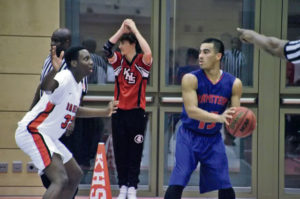 Ramstein’s senior leaders Naser Eaves and Gabe Fraley combined for 31 points and 19 rebounds and asserted themselves in the decisive fourth quarter as the Royals defeated Kaiserslautern 60-41 in the first-ever basketball game at the new Kaiserslautern gym.

The Royals were dealt a blow in practice this week when sparkplug senior Christian Hall suffered an injury and could not play. But sophomore Andrew Boggs stepped in and played a key role in the Royals victory, slicing to the basketball, hitting some key jumpers down the stretch and mixing it up on defense.

“Hall injured his knee during practice this week,” said Coach Andy O’Connor. “Huge blow. He missed all of last season with a similar injury. He was playing so well and to have it happen again was an instant wave of depression. Not because we are weaker as a team, but just because you want him to be rewarded for all his hard work.”

For the second straight game, Kaiserslautern started the game slowly. In Vilseck, they were down 21-5 before clawing back for the victory. This time, Ramstein put the Raiders in a hole with 14 straight points to start the game before Ty Dotson’s strong baseline move got the Raiders on the board at the 3:35 mark of the quarter.

The Royals’ Luis Figueroa hit the opening three pointer from the corner, followed by a layup and then a steal and a basket from Fraley. Trapping out of their zone defense, the Royals picked up a lay up from Eaves, Figueroa’s two free throws made it 11-0 and Amir Bishop’s three point play made it 14-0. The Royals led 19-5 at the end of the quarter.

In the second quarter, after a series of technical foul free throws, Kaiserslautern junior Isaak Pacheco muscled in for a three point play to make it 20-11. After the teams traded two baskets, Ramstein called a time out. It gave veteran Kaiserslautern Coach Corey Sullivan a chance to settle his troops, telling them repeatedly during the time out to “calm down.”

“We switched defenses. We talked about executing our stuff better. Had to calm down a bit,” Coach Sullivan said. “We practice defense quite a bit. Typically both Ramstein and Kaiserslautern have strong half court defenses.” The exortation worked.

Bryan Lunn’s three point play made it 25-17, Dotson canned a pair of free throws and the Ramstein lead was six. But a Boggs steal and basket for Ramstein extended the lead to eight and they went into half time leading 29-20.

The start of the third quarter was all Raiders as they started the third on a 10-2 run. With Ervin Johnson running the offense, they finally took the lead on a Brandon Morris steal and basket at 34-33. After Jerrod Little’s snaky layup regained the lead for the Royals, Jedrick Collins received a perfect pass from Dotson to take back the lead. But the Royals closed out the quarter with five points from Eaves, sandwiched around a three point play from Dotson, and it was a one point Royals lead at the end of three.

Eaves and Fraley’s senior leadership turned the tide in the fourth. Ramstein’s pressure defense kept Kaiserslautern from running and penetrating to the rim. Keying off the defense, Fraley opened the period with eight straight points and then zipped a pass to Eaves for another basket and the Royals were up by ten. Ramstein ramped up their three quarter court defense even further and held the Raiders to just two fourth quarter points, a hard drive to the basket by Dotson midway through the period.

“My three vets, JJ Little, Naser Eaves, and Gabe Fraley have been through it all in high school basketball (two or three times over), so when things don’t start to go our way, they always just keep playing and fighting and don’t let small things bother them,” O’Connor said. “We were missing several key players, so it’s hard to run all game long and expect to have anything in the tank left to finish the game strong. But that’s ok. We can win in the half court also.”

O’Connor was relieved with the victory after a less than stellar performance against Wiesbaden earlier in the week. “We are always looking to get better, to improve. We played a lot better in this game than we did against Wiesbaden. We just keep harping on the little things that win championships. Sometimes it takes a game or two of film study before players can realize how much effort they are expected to put into the defensive end of the floor.”

Sullivan, though disappointed with the loss, took away some positives from the game.

“I took away that my kids are fighters. They are resilient. They can compete at a high level. We just need to string a complete game together.”

Sullivan was happy to be playing at home. But he admitted that after eighteen years coaching in the old gym it felt unusual to be playing in the new gym. “I’m glad the first game is over. It really didn’t feel like our home court yet. It felt a bit odd, to be honest. It will take some time to get used to and to make it feel like home. There’s a lot of logistics we had to handle and take care of. That will get better and easier.”

In Ramstein, the Kaiserslautern girls gritted out a 44-41 victory over the rival Royals to keep their record perfect. Raiders outstanding senior Le’Jhanique Brown had 18 points and 11 rebounds to pace the hard fought victory. Her experience and leadership kept the team calm and focused on the goal.

“Le’Jhanique was the best player of the floor,” veteran coach Aaron Scalise said. “Her shooting, driving and rebounding made a big difference.”

The game was back and forth throughout with Kaiserslautern going into the halftime locker room with a 19-9 lead after the second quarter. The Royals scratched back to take a one point lead after three quarters, thanks to an 8-0 run, but Brown and sophomore point guard Emajanae Hawkins, with support from a strong bench effort, staved off the onslaught and gradually pulled away for the three point victory. Hawkins added ten points and was singled out by Scalise for her deft ballhandling against the strong Ramstein full court pressure. She was also, along with Desi Johnson, the defensive sparkplug.

“We knew we had to defend their shooters and I think we did a good job of that,” Scalise said. “Ramstein still hit some running jumpers and shots off the glass, though.”

Ramstein used a pressure defense to try to slow down the running Raiders. “I thought we handled the press very well,” he said, citing Hawkins leadership. “We got a lot of our points on the break, got a key three pointer from Rebecca Moon off the bench and a lot of solid contributions from everyone,” Scalise said.

“Ramstein’s ‘bigs’ are good,” he said, referring to their post players. “We were fortunate that they were not making all of their shots inside. They probably could have had six more points off the glass.”

Coach Scalise was pleased with the team’s efforts, knowing they are still young and it is early in the year. But he said he was a little frustrated with the number of turnovers.

“We had a lot of traveling calls against us,” he said. “We also missed way too many free throws. Defensively we might be a little too aggressive sometimes, which we need to work on. But we are happy to be winning so far because we have yet to have a home game. We are happy about being able to win in such a difficult place (Ramstein.) You know you are always going to have a good game against a Nate Brewster (Ramstein’s head coach) coached team.”

The victory was nice, of course, but Scalise knows that competition goes beyond the score.

“These kids are great kids. Great kids! They are so easy to coach,” Scalise said. “We’ll see what happens after the break.”

Both Ramstein and Kaiserslautern resume play on January 11 and 12 after the lengthy winter break. Kaiserslautern travels to Black Forest Academy and the Royals play in Vicenza.

At the holiday musical event, all KES grades performed in a concert on Dec. 10. The High School Band, String...