Remembering Asian American Pacific Islanders, their contributions and sacrifices through celebration and awareness 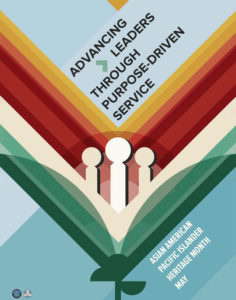 The month of May was chosen to commemorate the immigration of the first young Japanese fisherman named Manjiro Nakanohama, known as John Mung, who arrived to the U.S. on May 7, 1873, and was considered as the first ambassador to Japan. Furthermore, May 10, 1869, marks the anniversary of the first transcontinental railroad in which the majority of the workers were Chinese immigrants. These labor workers were responsible for laying down railroad tracks despite the labor intensive demands and hazardous tasks.

On June 19, 1978, New York Representative Horton introduced House Resolution 1007. This resolution proposed that the President of the United States of America designates a seven-day period as Asian American Pacific Islander Week. This joint resolution was passed by the House and Senate, and successfully signed by President Jimmy Carter on Oct. 5, 1978, declared as Public Law 95-419.

Over the course of the next decade, each President passed an annual proclamation for Asian American Pacific Islander Heritage Week until May 9, 1990, when President George H.W. Bush signed Public Law 101-283. This approved bill was passed by Congress, expanding the observance week to a month. Finally, on October 23, 1992, Congress passed Public Law 102-450 permanently designating May of each year as Asian American Pacific Islander Heritage Month.

The Asian American Pacific Islander Heritage Month does not focus on the Oriental and Pacific region. There are 48 Asian countries identified by the United Nations.  Asia is the world’s largest and most diverse continent that occupies the Eurasian landmass.

An estimated 4.6 billion people live in Asia which is about 60 % of the world’s population. According to the 2019 U.S. Census for the Asian category, an estimated 22.9 million Asians live in the U.S. Additionally, about 2.5 % of Asians are military veterans. For the Pacific Islander category, approximately 1.6 million are residents of the United States and 7.2 % are military veterans. Furthermore, Air Force demographics taken from Air Force Personnel Center show about 1.2 % of Airmen are Native Hawaiian/Other Pacific Islander and 4.3 % are Asian. These data shows the diversity and inclusion of Asians and Pacific Islanders, and their vital role in safeguarding America’s freedom as well as sustaining global peace across the world.

William Ah Hang, a Chinese American, was the first Asian American to enlist in the United States Navy in 1863. Also, there were more than 50 Chinese Americans who fought for both sides during the Civil War. Unfortunately, out of those who served, only a handful received recognition for their services in the form of pensions, benefits or path to citizenship.

The Medal of Honor is the nation’s highest medal for valor in combat that is awarded to the members of the United States Armed Forces. The Medal of Honor was authorized in 1861 during the American Civil War for Sailors and Marines, and the following year for the Soldiers. More than 3,464 Medals of Honors have been awarded across the United States Armed Forces.

Jose B. Nisperos, a Filipino from Philippines, was the first Asian American to receive the Medal of Honor during the Moro Rebellion. Having been mortally injured from several spear wounds in the body to the point where he could no longer stand, he continued to fire his rifle with one hand, defending his position and successfully repelling the enemies.

As of May 17, 2021, there have been a total of 94 Asian American Pacific Islander deaths for Operation Iraqi Freedom and 69 Asian American Pacific Islander deaths for Operation Enduring Freedom. These brave men and women from different Asian and Pacific Islander background, gave the ultimate sacrifice protecting America’s freedom. Some of these individuals were children of immigrants that came to United States seeking a better way of life. Some chose the path of military service to fulfill their dreams and honor their families.

To further show the important contribution of the Asian American Pacific Islanders, here is the excerpt from President Ronald Reagan’s Proclamation on April 20, 1981:

Among the most significant components of the American cultural blend are the ancient Asian-Pacific cultures. Asians have brought to the United States values and traditions that profoundly enrich American life. In a variety of fields that span the spectrum of human endeavor — including art, dance, agriculture, the sciences, medicine, commerce, government and philosophy — Asian and Pacific Americans have made outstanding contributions to the cultural and technological development of their adopted Nation. Their hard work, creativity and intelligence have inspired their fellow citizens, added new dimensions to our national life and strengthened the social fabric of our land.

Commonly, immigrants have come to American shores with few material possessions, relying on initiative, hard work and opportunity as the keys to success and prosperity in their new Nation. Asian and Pacific Americans have been squarely within this tradition. Overcoming great hardships, they have lived the American dream, and continue as exemplars of hope and inspiration not only to their fellow Americans, but also to the new groups of Asian and Pacific peoples who even now are joining the American family.

The United States owes a debt of gratitude to Asian and Pacific Americans for their contributions to the culture, heritage and freedom of the Nation we together love and serve.”