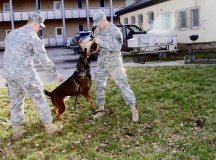 After two-and-a-half months of rigorous training led by Soldiers from the 131st Military Working Dog Detachment, two former tactical dogs achieved patrol dog certification, a task accomplished by fewer than 10 dog teams in the entire Department of the Army.