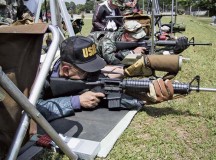 The rank of colonel on his Army Combat Uniform and the long rows of ribbons on his service uniform distinguish him, but there is something far rarer to be seen. He has earned two accolades in marksmanship that place him in a military tradition dating back over 100 years.