Regular force management updates are now being published at www.af.mil, including program updates, reports on voluntary program applications received at AFPC and changes to program eligibility. 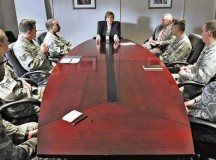 A key transition assistance official visited Ramstein to discuss force management and inform Airmen on outreach resources and assistance programs allowing for a smooth transition back in to the civilian world.

Air Force leaders announced force management programs Dec. 11 designed to reduce the force by thousands of Airmen over the next five years as a result of sequestration.