Story and photos by Kat Nickola
for MilitaryInGermany.com
October 1, 2021 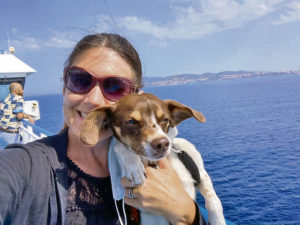 So you want to visit Sicily? Of course you do! Roman ruins, crumbling Greek temples, good food, sunny beaches, vibrant cities, boating on the water, hiking up a smoking volcano …. I could go on and on….

But how do you get there?

Most people would fly to Sicily, and possibly rent a car. But I’m here to offer another alternative. One that makes the journey just as fun and stress-free as the destination.

I drove into the Palermo ferry port three hours prior to departure and found that I was in the wrong place.  However, the cordial Sicilian police officer at the gate did his best to explain where I was to go, and it worked out just fine. (to avoid my mistake below for GPS coordinates) At the correct port gate, I was directed into a line with only two other cars, my paperwork was checked, and then my son, my dog, and I waited another hour as the line behind us grew and grew.

It was my first time boarding an Italian ferry and I didn’t want to get it wrong, but now I know that arriving 2 hours prior to departure, as recommended, is better. When it was my turn, I followed the helpful port staff who directed me to drive onto the ferry and down two ramps into the bowels of the ship.

“Grab your overnight bag,” I told my son. “We can’t return to the car until the trip is over.” I got my own bag plus our dog in his backpack, and we headed for the stairway up to the passenger areas.

“How are we going to get out?” My son asked as more cars blocked mine like a master Tetris board. “Hopefully they show us,” I replied. And they did. Being first on the boat actually meant we ended up being last off the next afternoon, but the loaders are well-rehearsed and give great directions. I was able to 10-point turn my Outback in a space the size of my patio, and easily drive off the ferry.

But, I’m getting ahead of myself. A ferry? 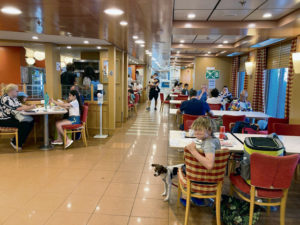 My son and I were at the end of a road trip from Germany to Italy and back. We stopped along the way as we drove south through Italy to see the major sites and ended in Sicily. It was long. It was chaotic. The driving was stressful. The toll and gas costs added up to airfare. I don’t recommend it.

But once we got to Sicily, things were different. It was necessary to have a car on the island. We were able to keep our own pace, spending mornings driving to historical sites, afternoons at the beach, and back to our room for a nice nap before a late dinner.

And we continued that holiday schedule on the ferry. After being parked on that low deck, we walked up to the reception desk on deck five and got our disposable room key card. Cabin 8038. Deck 8.

The cabin felt like a cruise boat cabin with a large window, two comfy single beds, a little desk, and a small bathroom. It was nice to have our own space to be quiet and sleep during the overnight ferry ride. We took a nap as the boat launched – it had been a long hot day of sightseeing.

As we returned from Sicily to northern Italy on the car ferry, I got to thinking about all the hours I had spent on Italian toll roads with white knuckles on the steering wheel. Let me just say, lesson learned. If I had to do it again, I’d take the ferry both ways and save Italy for shorter cheap-airfare trips.

Taking the ferry has definite perks. It’s cheaper than driving the length of Italy and can include an overnight in a nice berth. Transportation and accommodation are all booked in one fare. It also gives you a safe way to transport your car without having to be behind the wheel. 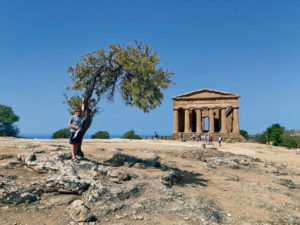 The ferry also saves time. During our car trip, it usually took us 40% longer than my mapping app estimated. There is simply a lot of traffic, construction, slowdowns, and even burning trucks on the side of the road in Italy. Driving is slow going. Instead, you could be on a ferry overnight; gaining ground while you sleep counts as a super perk.

Lastly, and for us this was extremely important, it meant we could still bring our dog along. Flying with a pet on vacation is not only costly but very stressful on the pet. However, a road trip is great fun for our pup Slim Jim and taking the ferry meant he could easily come along. In Sicily, he was welcome almost everywhere, too. If you travel with a pet, be sure to have their EU pet passport up to date.

There are lots of ferries around Italy; here I’ll focus on car-ferries to and from Sicily from the north of Italy.

There are two options, two companies, and two different ports in the northern part of Italy that regularly service Sicily with car ferries. Both options are reputable, comfortable, and safe. Both options offer daily (not Sunday) departures in each direction.

To/From the Port of Genoa

To/From the Port of Livorno

I chose to book with the Grimaldi lines into Livorno; primarily because the cost was lower and the timing better. Both ferry companies have two ships doing the route – all ships are very comparable with comfortable seating areas, bars, restaurants, open decks, a small pool, and cabins. It has the feel of a toned-down cruise ship.