Talk of the Town is a series highlighting the union communities within the County of Kaiserslautern, the City of Kaiserslautern and the Union Community of Winnweiler. The series aims to inform American service members and their families about the communities they’re joining during their time in the KMC. A Union Community is an administrative territorial community composed of a group of individual towns or villages. Each month we will feature a different community and provide facts about its history, heritage, and the local experiences it offers.

Our next stop will lead us to the Union Community of Winnweiler, located within Donnersberg County, the northern neighbor to Kaiserslautern County. The county seat is in Kirchheimbolanden and Winnweiler lies just south on the foot of Donnersberg mountain. We invite you to discover interesting and maybe not-so-well-known facts about your home away from home.

The total union community has about 13,800 inhabitants and an additional 900 Kaiserslautern Military Community members also call it their home.

Mayor Rudolf Jacob has been the Mayor of the Union Community since 2008 and would like to extend a warm welcome (see below).

Prisoners of war and a new settlement

Most likely Winnweiler was founded in the second half of the 8th century. It was first officially mentioned on Feb. 10, 891 as the village “Winidowilan,” which can be translated to mean “the settlement of the Wenden.” The Wenden, a Slavik population group, was settled as prisoners of war by Charlemagne within his territory. In the 18th century Winnweiler was first seat of a Lorraine and later a Habsburg-Lorraine upper office for the County of Falkenstein. The castle was built in 1604 and demolished 200 years later, but the Chapel of the Cross, which can be seen from afar, is a reminiscence of the time and is a popular church for weddings. Additional information about the castle is available at the museum in Winnweiler.

The Union Community of Winnweiler plays an important role in U.S. military history as well. After World War II, when Germany was divided into four occupational zones and Rheinland-Pfalz was in the French zone, the French began constructing an airfield. Upon heavy protest by local farmers, a compromise was agreed upon and one section of the newly constructed Sembach airfield was located in the County of Kaiserslautern. About one mile north the administrative area was developed on Heuberg, a sandy area of little agricultural value, however, located within Donnersberg County. Up until 1995 both sections were known as “Sembach Air Base,” home to the 86th Fighter Wing and 17th Air Force. The installation is now used by various U.S. Army units, such as a Military Police Brigade, a Medical Brigade, the United States Army Corrections Facility Europe, a small Navy intelligence unit and a recently activated Air Defense Artillery Brigade Headquarters. The post is now commonly referred to as “Sembach Kaserne.”

Celts and Romans were also fond of the valley surrounding the mountain and left numerous traces that can be seen and experienced. Over 2,000 years ago, Celtic ancestors erected an impressive central city on the plateau of the mountain, referred to as an Oppidum. This Oppidum was the central hub in the Rhine River valley and is one of the largest Celtic settlements north of the Alps. Romans, on the other hand, built settlements and created clay products in neighboring Eisenberg and near the village of Katzenbach. Take a journey into history and experience the mystic and exciting world of the Donnersberg Celts and Romans!

A visit to the Celtic village in Steinbach is like a fascinating journey into the mystical world of early inhabitants at Donnersberg. The small, reconstructed village is more than a museum, you can actually experience the culture of the Celts. Venture into a journey of the people who inhabited Donnersberg more than 2,000 years ago. Dwellings with wooden posts and semi-timbered structures, wooden shingles and facades made of clay, give realistic insight to the lives and times of the Celts. Visitors can try Celtic handcraft techniques such as felting, building arrows or creating beads out of clay. For more info, visit https://www.donnersberg-touristik.de/de 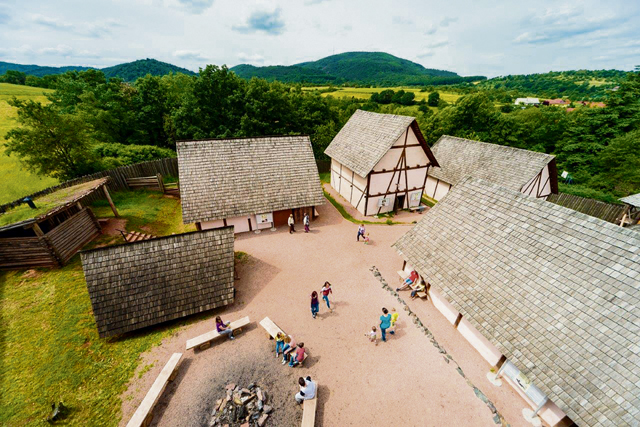 Falkenstein Castle is first recorded in 1135 as the castle of the Lords of Falkenstein and is located just northwest of the village of Imsbach. Around 1500 Uhland I acquired the castle rights and expanded it. His descendants then purchased a castle in Austria and settled there, leaving the structure to decompose. In 1674 it was besieged by French troops and eventually remained a ruin until it was partially restored after 1979 and is now used for medieval festivals and other festivities throughout the year, including a romantic Christmas market scheduled for Nov. 26 and 27 this year. The tiny town of Falkenstein with 220 inhabitants boasts two restaurants and a nostalgic, “timeless” café that offers homemade cake.

The Pfälzische Bergbaumuseum (mining museum) in Imsbach invites you to experience over 2,000 years of mining in the area. You can learn all about ores, rocks, and fossil fuels of the region in the former schoolhouse in Imsbach, which now houses a museum. The occurrence, extraction and processing of iron, manganese, copper, cobalt, gold, silver, and mercury are explained as well as the use of current stones and raw materials. The mineral display “Terra Crystallum” is new. You can experience historical mining in the “Weiße Grube” and “Grube Maria” (mine pits). English tours are also available. For more info, visit www.bew-imsbach.de

A synagoge and a Rococo church

Winnweiler has a history of Jewish culture, a former synagogue and a Jewish cemetery. The “Jüdisches Museum der Nordpfalz” gives valuable insight to the small Jewish community first mentioned in 1674. In 1901 a new synagogue was opened, but destroyed during the regime in the late 1930’s. A memorial plaque made out of sandstone with a carving is situated at the former site of the synagogue. Descendants of former Jews from Winnweiler from all parts of the world, including the United States, gather for family reunions or meetings annually. https://www.jüdisches-museum-winnweiler.de

On the other hand, surprisingly, a picturesque Rococo church can be found in the small town of Schweisweiler which was built in 1750 and restored from 1987 to 1993. A further place of interest in Schweisweiler is a small village museum “Leo’s Tenne”, which displays traditional handcraft professions such as stonemasons, roof tile makers, wagoners, hammersmiths and casters as well as household goods and devices. The venue can also be rented for events, concerts or gatherings. The adjacent farmhouse with a picturesque garden gives insight to the history of the village based on a selection of old photographs.

100 years of photography and a wild train ride

Discover the only model train that can transport passengers in Börrstadt. The Gartenbahn at a scale of 1:5 will take you on an exciting ride from an actual train station, a signal box, tunnels and bridges and will let your heart beat faster. The “Museum für Fotografenhandwerk” (photography museum) in Winn-weiler will lead you through 100 years of history of photography and there are changing displays in the gallery in the tower. For more info, visit http://www.fotomuseum-winnweiler.de and https://www.gartenbahn-boerrstadt.de

You might wish to take in a breathtaking view of the surroundings on Donnersberg mountain, go cross country skiing if the weather permits, hike along one of the many trails in the region or enjoy a mountain bike ride in the valley, such as the Donnersberg trail. There are numerous leisure time activities for sports fans, such as soccer, tennis, horseback riding, golf, swimming, fishing and athletics, to name a few, as well as a K-9 rescue dog squad and a boule club in Hochstein. Another prime option is a stroll at Retzbergweiher/Pfrimmerhof near Sippersfeld and dive into the atmosphere of a typical country style “Landgasthof”.For more info, visit https://www.donnersberg-touristik.de/de

A selection of small restaurants in the pedestrian area invites you to take in a taste of regional, German and international dishes. Small, often family-owned shops offer goods from clothing to antiques, regional produce and whisky and schnaps tasting as well as live music events. In addition, there are numerous dining opportunities in the individual villages, including a dart and billiard lounge in the town of Winnweiler.

As in other traditional towns, Winnweiler has two annual festivals, the Johannismarkt in late June and Oktobermarkt in early October, a Christmas market is planned for Dec. 10 and 11 this year. In addition, each village has its individual village celebration during the summer months.

For more information about the Union Community of Winnweiler, visit: www.winnweiler-vg.de with an English version coming soon. 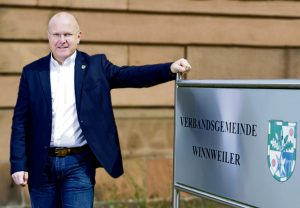 A warm welcome to the Union Community of Winnweiler

The Union Community of Winnweiler is often referred to the „gateway to Donnersberg“. Coming from the west it is an excellent starting point to dive into the beautiful and diverse Donnersberg landscape. And, it is worth it — the union community has a lot to offer:

Breathtaking views into the distance and a fantastic vista onto the highest mountain in the Pfalz region, wild romantic and light flooded forests, impressive rock formations and geological findings, wide valleys with small streams that phase into the distance, fields and meadows, idyllic lakes and old county style villages.

The Chapel of the Cross, which can be seen in the distance, the Schlossplatz and Lohnsbachaprk invite you along to a leisurely stroll through Winnweiler. A stop at the Jüdisches Museum or the Museum für Fotographiehandwerk or a climb up to Hochstein Kreuz with a fantastic view is definitely worth it. Winnweiler ia also the starting point of the Pfälzer Höhenweg and the Hinkelstein Wanderweg (both hiking routes) and I’m personally pleased about the re-opening of our completely renovated swimming pool.

Further excursions will take you to the Keltendorf in Steinbach, Castle Falkenstein and the Bergbauerlebniswelt Imsbach, symbolic for various ages of our history. Children will adore a train ride with the Gartenbahn in Börrstadt.

My favorite place? I admit, it is difficult with this multitude of choice, but I love to walk around the Oberes Pfrimmtal. Around Sippersfelder Weiher relaxing, shady forest paths, fresh air and clear water invite you to „refuel“. And, last but not least, experience Pfälzer hospitality! Is there anything better than rounding off a day after hiking or biking with a cool drink and an excellent dish together with a group of nice people?

We look forward to your visit and cordially invite our Kaiserslautern American members to join in our village life and experience our union community at its best!