Most new arrivals to Germany are familiar with the quality of German beer. Rightfully so. Beer is governed as food here. There are bound to be great choices.

But many may not know that Germany is also home to an incredible array of high quality wines, most of which are grown within a stone’s throw from the KMC.

If you don’t know much about wine, or even about German wine, prepare to be impressed. You should also get ready for some amazing day trips. 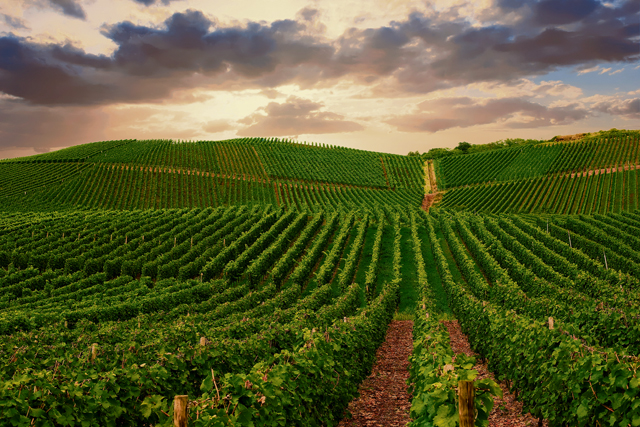 The history of winemaking in Germany stretches back millennia. As Roman soldiers made their way north and conquered new lands, they brought vines with them (which was easier than bringing huge barrels of wine over the Alps). In the river valleys of what is now Germany, they found excellent terrain and began cultivating grapes.

In one form or another, that practice hasn’t stopped since. Winemaking became more regulated under Charlemagne, was governed (and improved) by medieval monasteries, and was shaken up by Napoleon. And though the sheer amount of land used to grow vines has diminished through the centuries, the regions that remain are excellent. 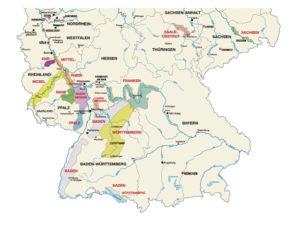 The KMC is almost literally surrounded by vineyards. The Pfalz and Rheinhessen regions flank the eastern side, and the Nahe and Mosel regions block the north. If you head south, you’ll cross a border and run smack into the French Alsace (which is a subject for a different article). Either way, you can find amazing vineyards and fascinating stories nearby – usually an hour or less from where you live. Here are some of the highlights:

Pfalz. Located just a short drive from the KMC, the Pfalz region is well-known in Europe for the Bad Dürkheim wine festival. It also produces an outstanding array of white wines, such as Riesling and Pinot Gris. The Pfalz also famously produces the red Dornfelder wine, which often makes for a wonderful complement to barbecued food.

Rheinhessen. This is one of Germany’s oldest wine regions: the Romans loved this area. Today, huge amounts of grapes are grown on the western bank of the Rhein river. For a long time, white wines like the Silvaner dominated here. Recently, Rheinhessen vintners have also begun specializing in red wines and sparkling wines. Travelers from the KMC can reach this region in about 30 minutes.

Nahe. The Nahe region is small but mighty. Named after the river that flows through an intense variety of landscapes, many grape varieties thrive here. These include the Müller-Thurgau and Riesling (both white wines), and the red varieties Dornfelder and Pinot Noir. Often overlooked in favor of the larger Rheinhessen or the picturesque Mosel, the Nahe is kind of like a secret hidden in plain sight. Visit a village like Niederhausen, which is a just over an hour away from Kaiserslautern, and enjoy.

Mosel. Though most of the great Mosel villages (like Bernkastel-Kues or Piesport) are a little over an hour away from the KMC, the region often feels like a whole other country. It’s because the terrain is jaw-droppingly beautiful. Steep curving roads, hidden valleys, clean water – it’s simply lovely. The white Mosel wines are excellent. Because many of them are slightly sweeter than usual, Mosel whites are often a good entrée for Americans who are just learning to enjoy wine.

Explore a lot, sip a little

Once you start digging in, you’ll be amazed at what you’ll find. There are also grand wine growing regions near Stuttgart and Baden-Baden, and the opportunities to explore these regions are almost endless.

A quick note: the culture surrounding alcoholic drinks is often very different in Europe than it is in the United States. In Germany, wine is less a functional beverage (i.e. something you drink for the sake of drinking) and more something to be savored and experienced. Drinking wine means appreciating it for the history, culture, and beautiful regions from which it comes. It is also, almost always, way better when paired with food.

For a complete (and fascinating) history about wines in Germany, be sure to check out one of the wine museums in Oppenheim (an hour away from Kaiserslautern) or Bernkastel-Kues (90 minutes away).

For trip planning and all the German wine information you can handle, visit https://www.germanwines.de/