Vice chief of staff: Every Dollar Counts campaign a success 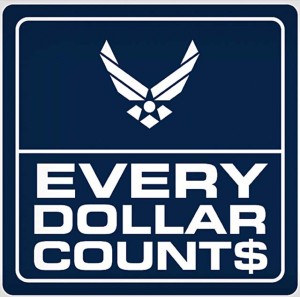 WASHINGTON — Throughout the month of May, Airmen submitted more than 11,000 cost-reducing ideas during the “Every Dollar Counts” campaign, an initiative that empowered Airmen to find and recommend areas of savings that may be used to support more urgent readiness needs.

In a letter to all Airmen, June 5, Air Force Vice Chief of Staff Gen. Larry Spencer highlighted the great ideas Airmen submitted and also encouraged Airmen to continue looking for innovative ways to save Air Force resources. Below is his letter.

Thank you! We asked for your help to find more cost effective ways to deliver airpower and you delivered — big time! The response during the “Airmen Powered by Innovation Call” generated 11,000-plus ideas in just 30 days! Now the ball is in our court to quickly assess the ideas and implement those that show the most promise — several of which have been implemented already!

To provide a recap of what we received, most of the ideas, 38 percent, affect personnel policy, 23 percent involved logistics and installation support and 11 percent recommended changes in information technology.

Next, in order of the most suggestions, were current operations, financial management, health services and acquisition. Recommended changes in personnel ranged from eliminating enlisted performance reports for chief master sergeants, (we’re giving that serious scrutiny now) to suggesting Airmen remain at permanent change of station locations longer. In the logistics area, many of you suggested creative ways to save energy, and Airmen at Joint Base Andrews, Md., suggested transitioning to lower-cost, leased vehicles for visiting distinguished visitors, which we implemented this week.

We also received several suggestions to limit the number and use of portable mobile devices.

Again, we extend our personal thanks for your enthusiastic support of our Air Force. As ideas are approved and implemented, I will continue to share them. In the meantime, I want to share some stories I have received about some of the amazing initiatives our Airmen are undertaking out in the field.

In a cost savings effort, Airmen at Homestead Air Reserve Base, Fla., are sharing training facilities and conducting joint exercises between the base fire department and Miami-Dade, Broward, Charlotte and Lee counties. The joint exercises save a cumulative total of approximately $500,000 a year.

Additionally, the 482nd Communications Squadron at Homestead AFB developed a procedure to audit their telecommunications bills for discrepancies. This effort ensured they were being charged correctly for services and constituted a total of $400,000 in savings.

Sometimes change happens because Airmen believe there might be a better way to get the job done, and that’s what happened at Columbus Air Force Base, Miss. The 50th Flying Training Squadron transitioned to a centralized scheduling operation where all instructors were pooled together, maximizing their ability to fill the schedule while giving back hours each day to the flight commanders and flight schedulers. With this fairly
drastic change in how they did business, they were able to fill their flying schedule and reduce their flying window by one hour. Although it is hard to quantify the specific savings generated from the change, the new system allows pilots to work more efficiently and take better advantage of their time and resources.

Then, there are superstars like Stacy Burgess from the 97th Comptroller Squadron at Altus Air Force Base, Okla. Stacy realized that many mandatory deployment items could be returned to the unit deployment manager and reissued to others who are deploying. The cost for required items prior to this policy was $2,892.64 per member; by reissuing many of the required items from returned inventory, the cost for new purchases was significantly decreased to $1,498.67 per Airman. On average, Altus deploys 188-236 individuals per year. This new policy has the potential to save the base and the Air Force approximately $50,000 to $100,000 per year. Our job as a headquarters is to share great ideas like Stacy’s with every base around the world — think of the savings!

Air Mobility Command’s Theater Express program is also a praiseworthy example of how a team can achieve significant cost savings. Aided by a decrease in overall airlift demand and the implementation of a more robust software tool, the Air Mobility Division team was able to more accurately estimate military airlift costs. This allowed them to increase the amount of cargo transported by regularly scheduled military aircraft resulting in a $342 million savings this year. Also, for the first time in AMC’s history, the AMC commander held a commander’s conference using Defense Connect On-Line and milBook. Both tools allowed approximately 250 people to participate in a fully interactive conference without the associated TDY costs.

While you were submitting your innovative proposals, I had a small team examining our current idea programs. Their task focused on four areas: consolidating and streamlining the processes, decreasing the cycle time from submission to approval, increasing the effectiveness of harvesting ideas that generate tangible savings and increasing replication of approved ideas across multiple locations.

Early progress updates indicate a promising new innovation idea process that will be more responsive to submitters and is expected to generate a higher percentage of approved and implemented concepts. This effort will result in a revamped Innovative Development through Employee Awareness and Productivity Enhancing Capital Investment program. We will continue accepting your outstanding suggestions for improving our force but will take a 30-day pause on processing ideas while the team prepares to stand up the new capability. In the interim, ideas can be submitted online at https://ipds.randolph.af.mil.

I encourage you to keep thinking about how we can accomplish our mission faster, better and cheaper. Today’s fiscal constraints are the tightest our Air Force has experienced in many years. Your overwhelming response during the Airmen Powered by Innovation Call for Ideas has emboldened us all with confidence that our Air Force will persevere through these tough times and emerge a more effective and efficient fighting force for America.