What is a German “Schultüte?” 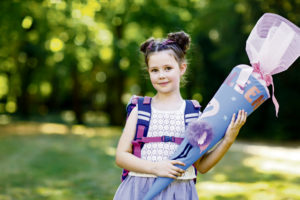 Every year, thousands of German kids carry a “Schultüte” to their first day of school.

The cones have been a German tradition for more than 100 years. Although there are no records of its actual origins, the so-called “Schultüte” or “Zuckertüte” seems to have been introduced to school children in Eastern Europe and Germany in the 19th century. Back then, parents took the cones to the school before the first day of first grade. The teachers then hung them up on a so-called “Zuckertütenbaum” (sugar cone tree). Children believed that the Zuckertütenbaum grew in the school’s basement. Once the sugar cones were ripe and large enough to pick, it was time for the children to go to school. This story was first introduced in a book by Moritz Heger in 1852, but other records mention the sugar cones even as early as 1801, according to a newspaper article in “Die Welt.”

Nowadays, no German first-grader goes through their first day of school without their Schultüte. The word Zuckertüte can be mostly heard in the Eastern parts of Germany. It doesn’t matter if the Schultüte is bought or self-made – it is a must-have, because the first day of elementary school has a special meaning in Germany. It has even become customary that godparents, aunts, uncles and grandparents contribute to the contents of the Schultüte. Even nowadays, contents still include sweets and small toys or even school supplies.

Although the story of the Zuckertütenbaum has disappeared largely, the eye-catching shape still remains. The cones come in all colors and can be self-made or bought. However, one tradition is still the same: The Schultüte may not be opened until the first day of elementary school is over.